Sea Lion is First Non-Human Mammal to Keep a Beat 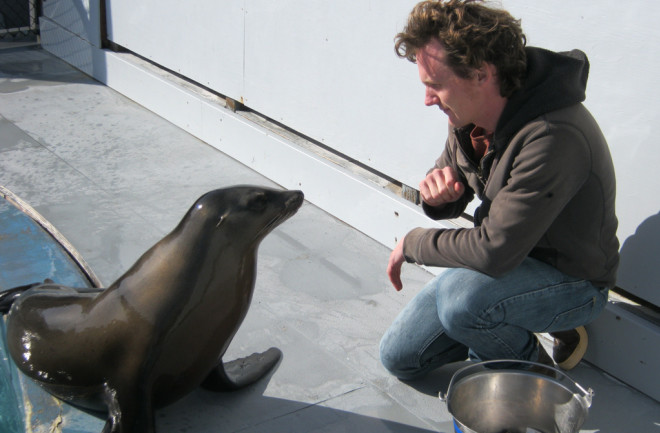 Image courtesy of University of California, Santa Cruz Middle-aged white guys awkwardly nodding along to songs might want to take a tip from Ronan the sea lion, who has turned that beat around — and turned a theory about rhythmic ability on its head. Ronan is the first known non-human mammal successfully trained to bob her head in time with a metronome-like sound — and then to apply her new skill to tempos and music she had not previously heard, according to researchers at the Long Marine Laboratory at the University of California, Santa Cruz. The sea lion demonstrated her mad skillz at “rhythmic entertainment entrainment,” more commonly known as keeping the beat, in a video released in conjunction with researchers’ findings in this week’s Journal of Comparative Psychology. Aside from the adorable factor, Ronan’s performance challenges the theory that only animals with a capacity for complex vocal learning, such as parrots, are capable of rhythmic entertainment entrainment. “The (theory’s) idea was that beat keeping is a fortuitous side effect of adaptations for vocal mimicry, which requires matching incoming auditory signals with outgoing vocal behavior,” said Peter Cook, a graduate student at the lab who began the experiment with Ronan as a side project, inspired by online videos of dancing, head-bobbing parrots and cockatoos. Sea lions are not known to be vocal mimics, and have a limited range of vocalizations — Ronan’s ability is evidence that beat-keeping may be much more common in the animal kingdom than the current theory suggests. Cook reports that Ronan’s favorite song appears to be Earth Wind and Fire’s “Boogie Wonderland,” though we’re betting that’s only because she hasn’t heard any tracks by Seal. http://youtu.be/6yS6qU_w3JQ