Sea anemones keep on stinging swallowed fish to digest them

Pity the small fish snagged by a sea anemone. Blundering into the waving tentacles, the fish is stung by hundreds of tiny harpoons shot out from stinging cells, each one loaded with potent venom. It is paralysed and moved towards the anemone's 'mouth', which lies in the centre of its tentacles and also doubles as its anus. The fish is swallowed and , but its ignominious fate doesn't end there. The anemone's internal cavity (which passes for its stomach) is also lined with thousands of stinging cells so that even after it's been swallowed, the fish continues to be stung. 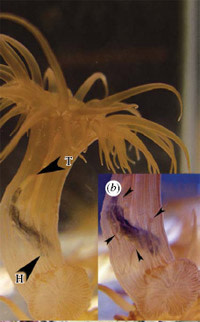 The sea anemone is a member of a 10,000-strong group of simple animals called the cnidarians, whose ranks also include jellyfish and corals. Every one of them has stinging cells called nematocysts and each of these consists of a capsule with a folded, pointed tube. The fluid in the capsule is kept under high pressure, so that the slightest disturbance causes the entire tube to turn inside out and shoot outwards with an acceleration over five million times that of gravity. At the point of impact, the harpoon exerts as much pressure as a bullet.

Not only does it inject the prey with venom, but the small harpoon fixes it to the tentacle, preventing it from escaping and dying elsewhere. But they have a third purpose too - according to new work from Ami Schlesinger from Tel Aviv University, they help to digest the prey.

Cnidarians face a problem when it comes to digestion. They are soft-bodied animals that lack any hard parts like teeth or gizzards for crunching through the hard coatings of their prey, from shelled crustaceans to scaly fish. Nor can they use an acid-filled sac like our stomach - cnidarians have a single internal cavity that plays a part in digesting food, absorbing nutrients, exchanging gases, excreting waste and providing structural support. It's the equivalent of multiple human organs and one that is basically an extension of the local seawater, periodically emptying and refilling itself.

Schlesinger fed small sea-bream larvae to the sea anemone Aiptasia diaphana. After the fish had been swallowed, she froze and dissected the anemones and found that they had wrapped the fish with small, thread-like tentacles called acontia. These filaments are found within the anemone's cavity and they clearly pierced the fish with several nematocysts - if their stinging cells were stained blue, the colour soon spread to the fish's body.

They acontia released at least five different digestive enzymes into the fish, designed to break down its fatty acids and its blood cells. They do their jobs well - when Schelsinger placed fish larvae in plastic dishes containing acontia taken from a sea anemone, the isolated tentacles soon killed the fish and started to disintegrate its body.

Sea anemones can sometimes stick their acontia through their body walls, leading some scientists to believe that their purpose is to defend the animal's vulnerable flanks. But Schelsinger is the first to show that the acontia are also essentially digestive organs. It's their chemical attack that allows an animal with no hard, chewing mouthparts to break down the body of a tougher meal. And because the stinging cells are sheathed until a meal arrives, the rest of the anemone's cavity isn't normally disrupted by the presence of digestive fluids.

As this is ostensibly a science communication blog, I'm going to occasionally pull out bits of papers that are either well written or horrendously badly written. I particularly hate the brand of completely pointless sentence that litters the introductions of academic papers, which really add nothing to the content of the paper. To compound the literary crime, they also tend to be shrouded in overblown language which attempts to hide their lack of content in a cloak of syllables. They're what legendary science writer Peter Medawar called "resounding banalities".

Here's the first, from this paper: "In cnidarians, as in all other venomous animals, the stinging apparatus actively translocates venom compounds away from the originator and into an external target". Which means "The stings of venomous animals inject venom into other animals". There's no other information there except possibly that the general direction of the venom's movement in relation to the stinger is "away".