Scientists Used Gene Editing to Create a Bull Without Horns. It Passed the Trait to its Offspring 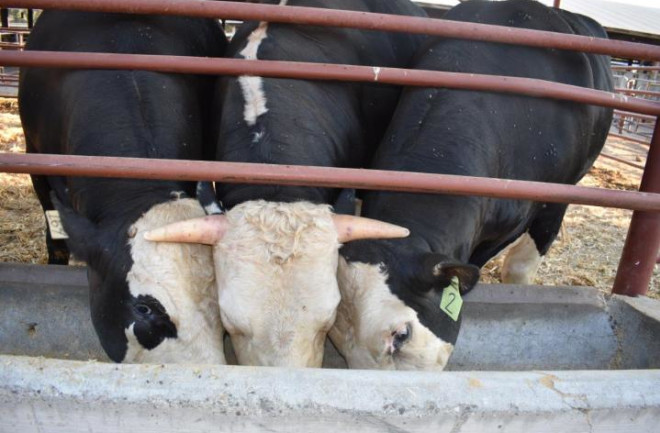 A horned bull from a control group is flanked by two hornless offspring of a genome-edited bull. (Credit: Alison Van Eenennaam)

In promising news for dairy farmers, researchers have bred what are likely the first offspring from a genome-edited bull. The calves were born without horns, a trait that occurs naturally in cattle but that was given to their father through previous DNA-editing research.

The offspring were otherwise normal and healthy, the authors reported Monday in Nature Biotechnology. It proves that the trait can be safely inserted into cattle and bred, says study co-author Alison Van Eenennaam of the University of California, Davis. The findings also argue for a loosening of some FDA guidelines on gene-edited animals, she says.

Since horned cattle are more aggressive, farmers often burn off the horn-producing cells when the calves are young. “That’s not pleasant for the calf or producer, and they would like to not have to do that,” Van Eenennaam says. But naturally horn-free bulls generally have less desirable offspring — so there’s interest in hornless, top-quality bulls. In fact, Van Eenennaam says, the desire for these bulls is so strong that dairy farmers have asked her to edit their cattle’s DNA.

In 2014, St. Paul, Minnesota-based biotechnology company Recombinetics used a genome editing tool to insert a no-horns gene into donor bull cells, cloned those cells and birthed a hornless calf. Van Eenennaam and her colleagues took a sperm sample when the calf had matured and bred five calves. Just like their father, none of the offspring grew horns, and they all passed genetic and physical health examinations.

While the cattle would be considered genetically modified organisms (GMOs), their genetic tweak comes thanks to a gene that already exists within their species. That means their edited genes are functionally indistinguishable from genes acquired through breeding programs, a process the industry has engaged in for generations.

The Road to GMO Acceptance

That’s compared to many other GMOs that use genes from different species. The distinction can matter when it comes to gaining approval from regulators: While the European Union doesn’t distinguish between the two, the U.S. Department of Agriculture does, and applies more lenient testing standards to plants modified with their own species’ DNA. Van Eenennaam hopes the FDA will also consider a two-tiered system of regulations, which could ease the bulls’ acceptance.

Right now, the FDA’s draft guidelines apply equally strict approval processes to the two forms of genetic modification. The process is so lengthy and expensive, only one product — a salmon variety with DNA from other fish species — has earned approval so far, and it took decades and millions of dollars. Though Van Eenennaam hopes her results will persuade the agency to loosen restrictions around modification that uses within-species DNA, she knows many consumers worry that genetically engineered foods could come with environmental or health problems despite the scientific consensus that there’s no proof of harm.

“Improved genetics in our production system could be really beneficial for things like disease resistance, and fits many sustainability goals,” she says. But if the FDA sticks with these tighter regulations of same-species genome editing, “it concerns me in terms of access to the technology for dairy producers.”