Scientists Use CRISPR To Protect Pigs Against Deadly Virus 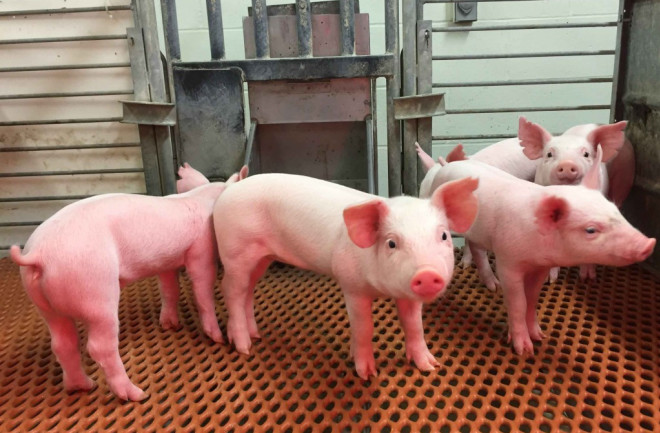 Scientists used the gene editing technology CRISPR to stop these pigs from getting a deadly flu. (Credit: Kristin Whitworth/University of Missouri) As flu season rears its ugly head, humans aren’t the only ones on the virus’ warpath. Pigs are also vulnerable to deadly infections. Porcine illness can mean huge losses for farmers and price hikes for pork. Now, new research shows gene editing could be a solution. “One of the greatest concerns for U.S. producers is outbreaks of new [viral] diseases,” said Raymond “Bob” Rowland, a pathobiologist at Kansas State University in Manhattan and co-author of the new study, in a media statement. “This work demonstrates the importance of [gene-editing] technology in solving complex disease problems.”

Newborn pigs are particularly susceptible to two viruses: transmissible gastroenteritis virus (TGEV) and porcine epidemic diarrhea virus (PEDV). Infection with the PEDV virus is almost always fatal. The piglets die from dehydration. In 2013, infection with the virus killed nearly 7 million pigs. Strategies like vaccines to protect the livestock from the diseases have not panned out. Randall Prather, a genetic engineer and molecular biologist, who led the new study with Rowland, suspected a molecule called ANPEP helped the deadly viruses take hold in the pigs. He thought deleting ANPEP in the pigs’ genomes might protect them from infection. Prather had seen success with a similar approach a few years ago. Knocking out a gene called CD163 in pregnant pigs protected the offspring from porcine reproductive and respiratory syndrome virus, a highly pathogenic disease that costs North American producers $600 million each year.

In the new study, Prather and colleagues used CRISPR/Cas9 gene editing to change two letters in the pigs’ 3 billion-letter genome. Pigs with the genetic modification did not make the ANPEP molecule, but appeared healthy, grew normally and produced offspring of their own, the researchers reported. Then they infected the gene-edited pigs with the TGEV and PEDV viruses. When the researchers examined the pigs for signs of infection, they found getting rid of the ANPEP molecule prevented the TGEV virus from sickening the pigs. Although pigs lacking ANPEP were still susceptible to the PEDV virus, the scientists say their research demonstrates the feasibility of gene editing to protect livestock. “We’ve made pigs that are not going to be susceptible to a virus,” said Prather, who views the work as an animal welfare issue. “Nobody wants to see dead or dying pigs.” He adds that the research also helps to relieve threats to food security and alleviate economic costs to the millions of family farmers that raise pigs. “This is people’s lives,” Prather said. “We have a solution for some of these diseases. We need to be able to get this into the food [production] chain so we can solve these problems.” Prather and colleagues published the research online October 12 in the journal Transgenic Research.