: The reproductive life of a cuckoo is both easy---it lays its eggs in others birds' nests, and lets them feed the young---and difficult: cuckoos are involved in an "evolutionary arms race" with other birds, finds a new study. Even as cuckoos improve their counterfeiting skills---producing eggs that look more like others birds'---the host birds get better and better at identifying the forged eggs. How the Heck: 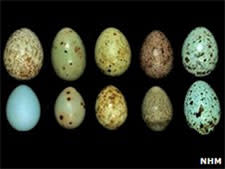 The Future Holds: Scientists still aren't sure why some hosts, like the dunnock, are so accepting of cuckoo eggs. Some scientists argue that this is because the risk in mistakenly rejecting a real egg outweighs the cost of raising a cuckoo egg. The jury's still out. Reference: "AVIAN VISION AND THE EVOLUTION OF EGG COLOR MIMICRY IN THE COMMON CUCKOO" Mary Caswell Stoddard and Martin Stevens. DOI: 10.1111/j.1558-5646.2011.01262.xImage: NHM