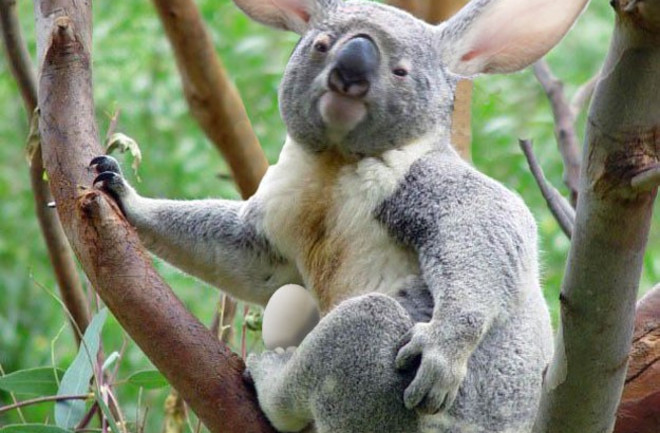 Photo: amatheny192/worth1000.comAustralian scientists have been fighting to keep ahead of the overpopulation of non-native rabbits pretty much since they were first introduced by English colonists. Finally, these researchers believe they have found the solution -- a genetically engineered koala-rabbit hybrid called a koalabbit! And we're not the only ones who think these GMOs are super cute: other rabbits find these new animals more sexually attractive than normal rabbits. And there's the rub: like mules, koalabbits are sterile. Not only does this keep the engineered genes out of the wild gene pool, it reduces the breeding success of the wild rabbits because they are spending their time chasing the cute koalabbits instead of breeding with each other. But who can blame them!?! Move over labradoodles -- koalabbits are here to stay!Using sterile animal hybrids to manage invasive species' populations: development of a new hybrid of Phascolarctos cinereus and Lepus curpaeums. A number of physical, chemical, and biological methods have historically been employed to reduce the overwhelming numbers of non-native rabbits (Lepus curpaeums) occupying fragile wilderness areas of the Australian continent. Here, we present a novel method of breeding control using modern genetics to produce new mammalian hybrids.  Read More >>