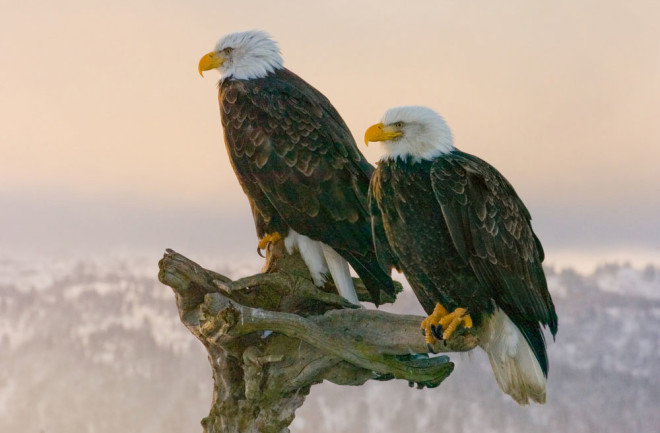 Many species of birds, like bald eagles, are monogamous. They mate for life, even if some birds have occasional flings. (Credit: FloridaStock/ shutterstock)

Wolves, prairie voles and bald eagles commit to their partners. But in the animal kingdom, these pairs are exceptions, not the rule. Now researchers say they’ve uncovered a universal genetic signature for monogamy. The discovery suggests evolution may have also led to a common genetic basis for other complex, social behaviors.

“It was surprising to see how robust the … similarities appear to be, even though the monogamous species we selected differ quite a bit,” said Hans Hofmann, a biologist at the University of Texas in Austin, who led the new research.

Scientists once thought that nearly all birds mated for life. But paternity testing revealed that’s not the case. In fact, the opposite is true. Most bird species have flings. But while they may not be faithful, avian males are loyal— or what scientists call “socially monogamous.” These pairs form bonds and both partners help rear young and protect their brood from danger. Some 90 percent of birds fall into this category.

And although this kind of monogamy also shows up across the animal kingdom, scientists know little about what drives the behavior. Hofmann and colleagues suspected that since monogamy evolved multiple times independently in different species, similar genetics might have been used repeatedly to propel the behavior.

The team assessed gene expression patterns in the brains of monogamous and non-monogamous males from an array of vertebrates including birds, fish and mammals. In the study, the researchers called a species monogamous if male and female partners form a bond and both parents participate in caring for offspring and defending them against danger. Sexual exclusivity was not part of the criteria for monogamy.

Of the couple thousands of genes the team analyzed, a few hundred displayed similar expression patterns in monogamous males compared to their non-monogamous counterparts, the researchers found. In the monogamous males, 24 genes — involved in neural development, cognitive function and learning and memory — stood out in particular, but traditional suspects like oxytocin — the so-called love hormone — didn’t make the cut, the researchers reported January 7 in the journal Proceedings of the National Academy of Sciences.

The similar expression patterns the team found in monogamous males were unexpected. The researchers tried to find other reasons for their results, but neither the animals’ evolutionary histories nor their personality traits or habitats could explain it. The discovery means species as distinct as fish and birds share a common genetic signature at the root of their parental behaviors.