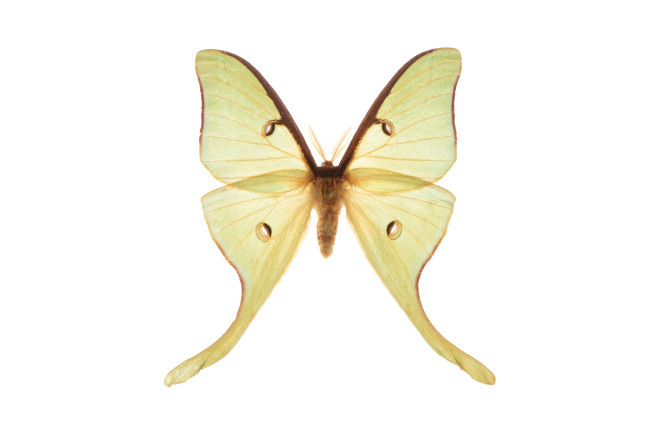 Long and expendable tailwings, which create sensory illusions and fall off after a bat bite, can significantly improve a moths' survival chances.(Credit: The Kawahara Lab; The McGuire Center for Lepidoptera and Biodiversity at the University of Florida) Scientists staged dogfights between moths and bats — and experimentally altered the moths' wings — to recreate evolution and shed light on the sonic illusions moths spin to evade bats. For more than 60 million years, bats and moths have engaged in an evolutionary arms race across the night sky. Bats hunt their insect prey using ultrasonic sonar, while the insects counter these predators with numerous elaborate strategies, including aerial acrobatics, sonar jamming and sonic decoys. Previous research found that the long elaborate tails on the hindwings (lower parts of the wings) of some silk moths can help them defend against bats. When these tails spin, they can deflect bat sonar signals, creating sensory illusions that divert bats away from the moths' bodies. So when bats swoop in for the kill, they often strike the expendable tails instead. To see what wing shapes might be best at foiling bats, researchers investigated more than 800 museum specimens of silk moths. This family of moths, known as the Saturniidae, includes some of the largest species of moths in the world, and their hindwings can vary greatly in length, shape, color and twisting. "Conducting research in the tropics, our team was always excited to see these large, showy saturniid moths at our light traps," said study co-lead author Juliette Rubin, a sensory ecologist at Boise State University in Idaho. "After finding enough individuals with torn hindwings and tails, we began to seriously consider how we might test the evolutionary path of these intricate wing shapes and quantify how they fared against bat predators." "The Saturniidae are fascinating partly because of their life history — they only live for a week or two as adults," said study co-lead author Chris Hamilton, an evolutionary biologist at the Florida Museum of Natural History in Gainesville. "If you can get away from even that first bat attack, you've just increased your chances of finding a mate and passing on your genes exponentially." After analyzing nearly 800 traits of these moths, the scientists created a detailed family tree that helped map the evolution of silk moth wings. They found the hindwings underwent abrupt shifts in shape, with unrelated moths repeatedly evolving in similar ways, suggesting that certain wing shapes might be significantly more effective at deflecting bats than others. Specifically, four classes of hindwing shape evolved multiple times in silk moths globally — short tails, long lobes and two kinds of extra-long tails.

The researchers then pit three different species of silk moths against 16 big brown bats to see how well different moth wing shapes protected the insects. They also experimentally altered the shapes of moth wings to see what happened, either using scissors to cut off pieces of hindwing or small dabs of glue to stick on extra bits of hindwing onto wings. Ultrasonic microphones and high-speed cameras helped the scientists analyze how well these foes competed in battles. "The bat-moth battles were always fascinating to watch. Both animals are roughly the same size in terms of wingspan, and while these bats are excellent hunters, often using their entire wing membrane to wrap around the moth, the moths are also extremely strong fliers," Rubin said. "All in all, they are well-matched adversaries." African moon moths, which have long-tailed wings, performed much better with these tails then without. Unaltered African moon moths evaded bats 73 percent of the time, but this dropped to 45 percent with shortened tails and 34 percent with none. Another tailed species, luna moths, performed similarly. In contrast, polyphemus moths, which naturally have tailless wings, normally escaped bats only 27 percent of the time in dogfights. However, enlarging their hindwings to match the size of African moon moths and luna moths boosted their escape rates to 56 percent.

All in all, the researchers found that as hindwing size and tail length grew, moths were increasingly better at escaping bats. "This is an incredibly unique story where the mechanism has been discovered that is driving the evolution of a trait, and that the presence or absence of this trait is linked to changes in survivability and differences between speciation and extinction — the rate which new lineages arise and go extinct," Hamilton said. It remains a mystery why evolution favored short tails in a number of silk moth species. Possible answers might be that females prefer such tails in these species, or that short tails offer some flight advantages, or simply that mutations for long tails did not occur in these lineages. "It's an open question, and one that we hope to dig into with future studies," Rubin said. Future research will also investigate how these moths interact with bats in the wild "to better understand how these battles unfold across the night sky," Rubin said. "Using state-of-the-art technology, we also plan to record echoes reflected off these complex moth wing shape to get a window into how the bat might perceive its intended prey." The scientists detailed their findings online July 4 in the journal Science Advances.