Scientists Recruit Crows as Filmmakers to Study Tool Use 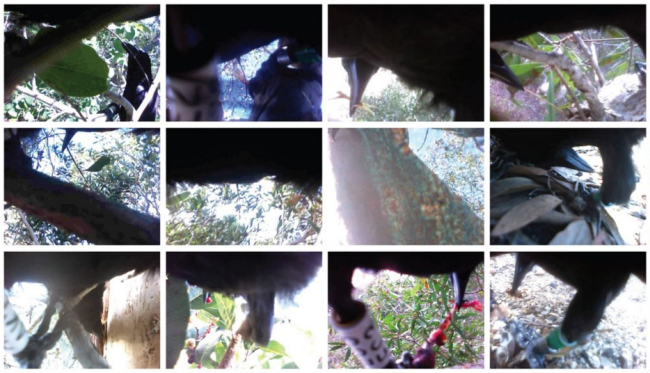 New Caledonian crows are some of the world's most famous non-human tool users. The crows employ sticks, leaves, and even bits of wire in the lab to probe holes in branches or logs, fishing out tasty bugs. But scientists are usually stuck studying these behaviors in artificial environments. To get a better perspective on how these birds make and use tools in nature, researchers in the United Kingdom tried something new: they turned wild crows into documentary filmmakers. Jolyon Troscianko, of the University of Birmingham, and Christian Rutz, of the University of Oxford, developed tiny video cameras for spying on crows. Then they went to New Caledonia, the archipelago east of Australia where the birds (Corvus moneduloides) live. In their forest study area, the researchers trapped 19 wild crows. Each time they trapped a bird, they held it overnight while custom-building and programming a video logger that wouldn't weigh the bird down too much. They attached the camera to the underside of the bird's tail, so that the lens pointed forward and up along the belly. Then they released the birds back into the forest. The cameras switched on periodically for a few minutes at a time, capturing snippets of whatever their carriers (and any other birds around them) were doing. After a week or so, the devices dropped off of the birds. The researchers used radio tags on the cameras to track them down again and collect the footage they'd taken. The researchers were able to retrieve 10 cameras that held 714 minutes of video footage. In the videos, they saw all kinds of crow behaviors. Birds flew, preened their feathers, nibbled fruits or nuts, and built nests. One fed pieces of a frog to a begging chick. The videos also showed eight instances of tool use by four different crows. The birds used twigs to probe inside trees or under leaf litter on the ground and fish out bugs. Twice, the videos showed birds fashioning tools with hooked ends—one of the crow's most complex tool types. One crow spent about three minutes making such a tool. It trimmed a live twig down to the length it wanted, stripped off the bark and leaves, and modified a node in the twig to create a hook. This is the first-ever footage of crows manufacturing their hooked fishing tools under totally natural conditions. It let Troscianko and Rutz estimate, conservatively, that New Caledonian crows spend about 3 percent of their time making and using tools. It also showed that the best way to study these handy birds might be to put them behind the camera. https://www.youtube.com/watch?v=pqe3HtIdkNU&feature=youtu.be Image: from Troscianko and Rutz (2015).

MindPanpsychism: The Trippy Theory That Everything From Bananas to Bicycles Are Conscious

MindHow Learning to Drive Changes Your Brain
Recommendations From Our Store