Scientists Race to Preserve the Biodiversity Inside Our Bodies

The human microbiome has untold numbers of diverse bacteria within it. But around the world, many species are dying out. 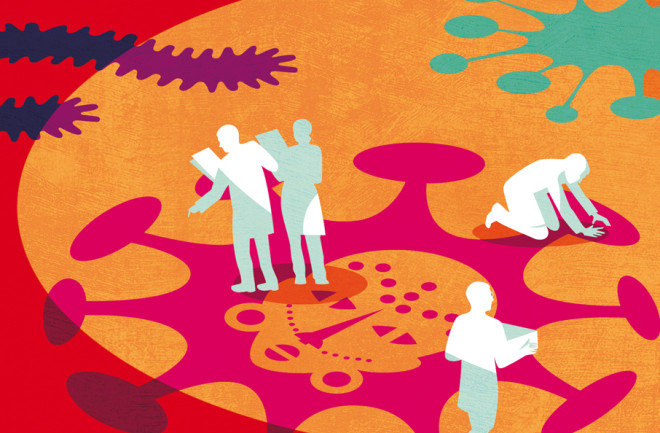 In the Amazon rainforest of Venezuela, Yanomami hunter-gatherers subsist on cassava, palm hearts and wild banana. They also hunt frogs, monkeys and tapirs, using techniques that probably would have been familiar to their ancestors 11,000 years ago. The extraordinary continuity of their culture, and the fact that some of the groups have had scant contact with outsiders, led biologists to wonder whether the Yanomami might reveal what the human digestive system looked like before industrialization supplied the world with processed foods and antibiotics.

In 2009, researchers had a chance to find out in a previously unknown Yanomami village. Health workers collected fecal and skin samples from about 30 villagers. When researchers cultured and analyzed microbes in the feces, the scientists discovered whole categories of bacteria that were absent from the guts of people from industrialized countries. Even more striking, they found the microbial population in the average Westerner to be about half as diverse as the community inside these hunter-gatherers.

Given the well-established importance of gut flora in digestion and metabolism, the researchers realized that this Yanomami microbial bounty might have implications beyond basic science. People’s personal microbial communities — or microbiomes — are believed to play a role in disorders ranging from obesity and diabetes to inflammatory bowel disease and Alzheimer’s, which shorten lives and overburden health care systems. (The global economic impact of obesity alone is $2 trillion annually.) These disorders don’t plague these preindustrial Amerindians, however. So researchers want to learn which microbes protect them and figure out how to reintroduce them in modern societies. It has the potential to affect health more profoundly than the discovery of the fabled Fountain of Youth.

But the opportunity might be more fleeting than youth itself. “The world is becoming urban so fast,” says Rutgers University microbiologist Maria Gloria Dominguez-Bello, co-author of a 2015 study in the journal Science Advances that reveals the Yanomami microbiome. “Our lifestyles are killing microbial diversity.” And although nobody has yet determined exactly what the Yanomami mystery bugs are doing, and how they improve an individual’s health, she believes that scientists need to collect and preserve as many microbes as possible in anticipation of future breakthroughs. “We cannot afford to wait,” she says, “or we’ll have lost the high diversity of the human microbiome of traditional peoples . . . [before] we understand how to use the microbiome to improve health.”

Finding Freezers on the Fly

About two and a half years before she published her Yanomami gut census, Dominguez-Bello nearly lost her entire microbe collection: freezers filled with irreplaceable specimens amassed from people around the world over much of her career. She had just moved from the University of Puerto Rico to New York University when Hurricane Sandy slammed the East Coast. Labs were flooded. Power was lost. She just managed to hold on to her microbial stock by hustling the bugs to alternative storage on Long Island. “I was lucky,” she says. “But it really reinforced the idea that we need to do something because these collections are very vulnerable.”

Might the microbes be less at risk in a place that’s naturally refrigerated? Dominguez-Bello asked herself this after reading about the Svalbard Global Seed Vault, a storage facility for plant biodiversity in the Norwegian Arctic, about 700 miles below the North Pole. Founded by the Norwegian government in 2004, the vault contains seeds for over a million different plants from around the globe. The seeds are securely stored inside a mountain, naturally protected by the permafrost and backed up by a mechanical cooling system. They’re available to the nations that deposited them in case flora is lost to environmental calamity or industrial farming.

“There are a lot of parallels to the microbiome,” Dominguez-Bello observes. “They’re preserving the seeds that nature created before the plants completely disappear.” She scheduled a call to find out more.

One year later, in 2018, she founded the Microbiota Vault Trust with prominent microbiome researchers, including Rob Knight at the University of California, San Diego. Together, they announced their initiative in a Science article last October, writing, “We owe future generations the microbes that colonized our ancestors for at least 200,000 years of human evolution.” The microbiota vault project now encompasses scientists based in countries ranging from Venezuela and Norway to Hong Kong and Switzerland.

The researchers are approaching the project with scientific pragmatism and personal passion. “Coming from New Zealand, where many species have vanished, the value of preserving biodiversity has always been clear to me,” says Knight. “Once the last specimen dies, there’s nothing you can do.” Therefore, Knight and his colleagues are determined to keep the bacteria alive and preserved, as opposed to simply sequencing their DNA. They aim to adopt what they can from the Seed Vault’s successes, but filtered through their own expertise.

“The vault needs to be in a neutral country with a reliable and unbiased agenda, in a stable facility with good environmental controls,” explains Knight. Nations need to feel that their contributions are safe — and won’t be unfairly exploited by other countries or corporations — and the microbes need to be maintained at minus 112 degrees Fahrenheit, possible only via liquid nitrogen refrigeration. Norway looks promising, as does Switzerland.

Funding is another challenge. The Seed Vault cost about $9 million to build. Given the greater complexity of the nitrogen refrigeration, building and endowing the microbiota vault could cost well over 10 times that amount.

Not that researchers are waiting until the vault is open to collect and preserve threatened gut microbes. In addition to ongoing collection efforts by Knight and Dominguez-Bello, the MIT-based Global Microbiome Conservancy is leading a large-scale initiative to collect stool samples and store gut microbiomes of people in developing countries throughout Africa, Asia, South America, the Arctic and Oceana. They’ve already banked more than 11,000 strains of bacteria and have uncovered 60 previously unknown genera.

“We expect close collaboration between the two groups,” says Knight. “The microbiome vault is a permanent archive, and the Global Microbiome Conservancy is a working collection.” In other words, the conservancy will be an accumulator and facilitator of research on what the bugs do, while the vault ensures that viable microbes are always available if and when their function is understood.

While Dominguez-Bello was working on the beginnings of the microbiota vault, University of Minnesota computational biologist Dan Knights was collecting gut flora from Hmong populations in Thailand and Hmong immigrants in the Twin Cities. Hmong people often suffer from obesity when they come to the U.S. from Southeast Asia. Although a change in cuisine may directly contribute — there’s a world of difference between bok choy and Big Macs — Knights wanted to learn whether changes in the microbiome might also have indirectly led to weight gain.

The results of his study, published in Cell last November, surprised even him. “When people move to a new country, they begin to lose their native microbes and pick up the new country’s microbes almost immediately,” he says. In fact, “immigrants’ microbiomes changed much faster than their diets.” Given the metabolic role of the microbiome, weight gain may be partially explained by this transition.

Dominguez-Bello could not have planned better validation of her case for microbial vulnerability, let alone the need for a vault. It’s entirely possible that even the Yanomami hunter-gatherers she first studied just 10 years ago no longer harbor as much microbial diversity as her frozen samples. (The health care workers who made contact provided them with antibiotics.) No microbiome is safe until it’s on ice.

Knights’ research also exposes one of the problems with the current fad of knowing your gut health. Companies offer to sequence people’s microbiomes for a couple of hundred dollars and provide dietary advice to cultivate certain species, ostensibly to improve well-being. But that health boost is inherently limited, since the benchmark for microbial diversity derives from the gut census of other Westerners. These tests may be useful for an individual to monitor the composition of their own microbiome over time, but the labs may not even know about many beneficial bugs.

“The Microbiota Vault is a must-have,” says Knights. Like Dominguez-Bello, he sees it as a sort of global backup gut, available for withdrawals.

But Knights also envisions it becoming a global microbial lending library. “Donating microbes to the vault is a gift to future generations,” he says. “It is another way of passing on your genes. Your human genes go to your own children, but your microbiome genes could one day find a home in millions of humans.”

Jonathon Keats is a contributing editor at Discover. This story originally appeared in print as "Save the Microbes!"