Scientists suggest that chimps pick trees that make specific sounds as a possible method of communication. 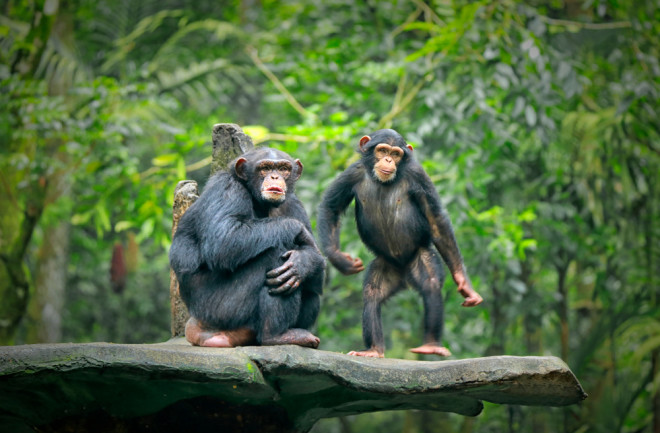 Some groups of chimpanzees throw rocks against certain trees. Scientists still aren't quite sure why. (Credit: Ari Wid/Shutterstock)

We’ve long known that chimpanzees, our closest evolutionary kin, have a penchant for using tools. Most wild chimpanzees use leaves, twigs and sticks to forage for food. Some chimp populations use stones as hammers and anvils to split open nuts. Others wield stone cleavers to slice through large fruits. As first observed by famed primatologist Jane Goodall, some male chimpanzees even hurl rocks and spears as displays of dominance.

For the most part, chimpanzees have been observed using tools for foraging purposes. But in 2016, a study in Nature described a bizarre, previously undocumented behavior among several chimpanzee populations in West Africa: throwing rocks at trees.

And because these tool-wielding apes were reusing the same sites, causing rocks to pile up around hollow tree trunks, the researchers suggested that the behavior is some sort of ritual.

Now, scientists are exploring another explanation for the strange activity: communication. In a study published this week in the journal Biology Letters, the research team describes several field experiments to investigate the “thunk” produced when the rock strikes the trunk — and found that the chimps were choosing specific trees that result in a more full-bodied sound.

Unusual methods of communication among animals are nothing new. Many species harness their unique biology to talk amongst themselves, find mates and announce their territory. Some even take advantage of their environment to produce optimal acoustics. Frogs, for example, will choose tree holes and drainage pipes that amplify their calls.

Other animals use tools as a way to tweak their communication techniques. Male palm cockatoos, a type of parrot, will turn branches and seed pods into makeshift drumsticks, beating out a steady tempo as a way to attract mates. Orangutans will sound alarms known as kiss-squeaks, which they sometimes modify by putting leaves in front of their mouths.

In the study, the researchers set out to see if the chimpanzees were also using tools to communicate by chucking rocks at trees. The study authors note that in all the prior video recordings of the behavior, it is difficult to make out whether the impact of the rock hitting the tree actually makes a sound. Beyond that, most of the chimpanzees emit a series of breathy, honking calls — a well-studied phenomenon called a pant-hoot — right before hurling the rock, making the impact noises even more difficult to detect.

To test their theory, the scientists conducted a series of experiments to compare the sound of rocks hitting both trees the chimps often pelted and those they ignored. They found almost 40 trees frequented by the chimps, marked by visible impact wounds and clusters of rocks surrounding, or inside, the trunk. The researchers chose the control trees by selecting species similar in size, bark and abundance to those the chimpanzees used.

During the experiments, the scientists looked at the tree’s species, size and the part of the tree typically struck — the roots, hollow cavity or trunk. After simulating the chimps’ rock-throwing behavior and recording the impact with a microphone, the research team had the sounds analyzed.

The study authors found that the chimpanzees were using particular tree species that produce a low-frequency, resonant noise when struck. They also noted that the roots themselves were an important feature of those trees, emitting low-frequency sounds with a longer duration. Because low-frequency sounds can travel great distances, the scientists say that these noises are a good choice for long-distance communication.

Ultimately, the scientists suggest that at least one function of the rock-throwing behavior is simply to make noise — and potentially communicate across distances. Beyond the fact that low frequencies travel further, the authors note that resonant noises, which all of the rock-throwing trees produced, also echo in the environment for longer.

But the authors also mention a few of the study’s limitations. As a way to transmit sounds, throwing a single rock wouldn’t be as effective as banging on the buttress roots of the tree with their feet, an oft-observed chimp behavior known as buttress drumming. In addition, the rock-chucking is usually accompanied by a series of pant-hoots, which attract more attention than the impact itself.

While the researchers note that communication is one possible explanation for the behavior, they conclude that there must be others to account for its sheer persistence in certain chimp communities. They suggest that future studies should focus on how chimps choose the rocks and trees themselves. Beyond that, probing the potential cultural elements of the behavior might help conservation efforts in the wild.