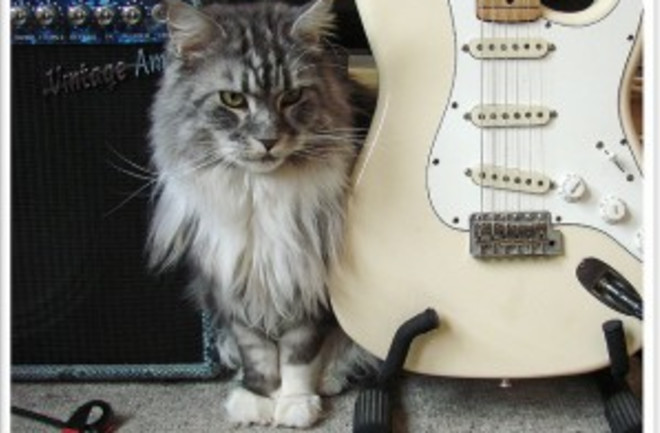 We know that babies like to dance to music from a very early age. But do other species appreciate our music as much as humans do? These researchers hypothesized that “in order for music to be effective with other species, it must be in the frequency range and with similar tempos to those used in natural communication by each species.” In other words, for maximum effect, music should be tailored to what each species likes to listen to. Here, the scientists made (pretty trippy) music specifically for cats, determining that the cats liked their “species-appropriate” music more than human music.

“Many studies have attempted to use music to influence the behavior of nonhuman animals; however, these studies have often led to conflicting outcomes. We have developed a theoretical framework that hypothesizes that in order for music to be effective with other species, it must be in the frequency range and with similar tempos to those used in natural communication by each species. We have used this framework to compose music that is species-appropriate for a few animal species.

In this paper we created species-appropriate music for domestic cats and tested this music in comparison with music with similar affective content composed for humans. We presented two examples of cat music in counter-balanced order with two examples of human music and evaluated the behavior and response latencies of cats to each piece. Cats showed a significant preference for and interest in species-appropriate music compared with human music (Median (IQR) 1.5 (0.5-2.0) acts for cat music, 0.25 (0.0-0.5) acts for human music, P <0.002) and responded with significantly shorter latencies (Median (IQR) 110.0 (54-138.75) s for cat music, 171.75 (151-180) s for human music (P< 0.001). Younger and older cats were more responsive to cat music than middle-aged acts (cubic trend, r2 = 0.477, P < 0.001). The results suggest novel and more appropriate ways for using music as auditory enrichment for nonhuman animals.”

Ever wonder what your outdoor cat does all day long? Behold the KittyCam! Flashback Friday: Optimizing the sensory characteristics and acceptance of canned cat food: use of a human taste panel. Sorry, you probably don’t understand your cat’s meows.