Scientists in the Amazon Have Recorded the World’s Loudest Bird. It Hits a Painful 125 Decibels 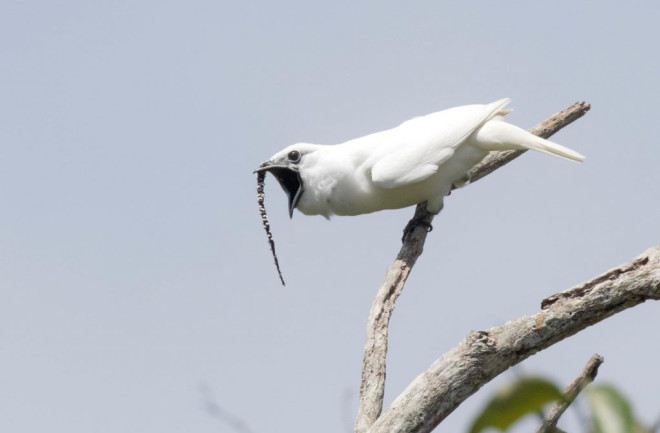 The observation, published Monday in the journal Current Biology, comes with some unanswered questions about the strange bird.

Most animals reserve their loudest calls for long-distance communication, says study coauthor Jeff Podos, a bird vocalization researcher at the University of Massachusetts Amherst. But the male white bellbird blasts the louder of its two songs within 13 feet of females. As strange as the behavior is, it’s not too far-fetched a find in the Amazon. “If you’re going to see something weird going on in the bird world, you’re more likely to see it in the tropics,” Podos says.

Mario Cohn-Haft, a researcher with the National Institute of Amazonian Research and paper coauthor, first hiked into these mountains in 2013. When he saw that white bellbirds had unusually thick ribs and abdominal muscles, he figured their anatomy might have something to do with the bird’s loud calls.

Along with some hired locals, longtime friends Cohn-Haft and Podos hiked up to the birds with a recorder and a laser pointer. Typically, recording sound volume requires careful calibration, Podos says. But the team used a new device that picks up sound amplitude almost instantly. When the team saw how precise the readings were, “it was awesome,” Podos says. “It’s just like gold.” Those values, paired with the distance-reading function of the laser, let the researchers calculate how many decibels the birdsong could reach.

Compared to the screaming piha, a relative to the bellbird that was previously considered one of the loudest known birds, the white bellbirds sing over 9 decibels louder. The song males sing most often can reach 116 decibels, while the version they sing to females can reach 125 decibels. Though it’s hard to compare vocalizations amongst species, Podos says, these calls are louder than those of howler monkeys, or a chain saw operating three feet away.

The mating call also comes with a strange performance. The males turn their back to the female, lower their tail and head, and puff up. “And then all of a sudden, boom,” Podos says — one note comes screeching out, and the bird flips around dramatically to sing the second tone directly into the female’s face. The researchers think this volume might damage the female’s hearing, but maybe it’s a sacrifice she is willing to make for the sake of a good mate.

Species from the Amazon are under intense sexual selection pressures, so it makes sense that two of the loudest birds on record are from the region. Also, the screaming piha and white bellbirds are fruit-eaters, and Podos thinks the wide beaks needed for choking down berries could also help project loud calls.

That’s one of several questions Podos and Cohn-Haft still have, and the pair hope to return to the mountains soon to hear more of these calls. Though most people think all three bellbird subspecies are screechy, Podos disagrees.

“I think the white bellbird has the most musical call,” he says.