When Walt Disney created Mickey Mouse in 1928, he understood the draw that anthropomorphic mice would have. But even Walt's imagination might have struggled to foresee the events that have just taken place in a German genetics laboratory. There, a group of scientists led by Wolfgang Enard have "humanising" a gene in mice to study its potential relevance for human evolution. 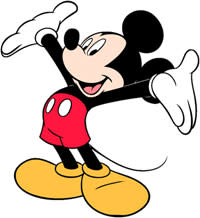 The gene in question is the fascinating FOXP2, which I have written extensively about before, particularly in a feature for New Scientist. FOXP2 was initially identified as the gene behind an inherited disorder that affected language and grammar skills. Subsequently hailed as a "language gene", it proved to be anything but. The gene, and its encoded protein, is incredibly conserved among animals, even among those without sophisticated communication skills. The chimp version differs from our own by just two amino acids; the mouse adds a single change on top of that.

The two amino acids that have cropped up since our split from chimps are unique to us and there's plenty of evidence that they're the result of intense natural selection. There has always been the tantalising possibility that these changes were crucial for the evolution of our speech and language skills but until now, no one really understood their purpose. No human has ever been found with mutations at these crucial positions. Obviously, genetically manipulating humans or chimps is out of the question, but the fact that the mouse version is so similar gave Enard a unique opportunity.

He tweaked the mouse Foxp2 so that it produced a protein with the two human-specific amino acids. The resulting mice couldn't speak like their cartoon equals, but their calls were subtly altered, their central nervous system developed in different ways, and they showed changes in parts of the brain where FOXP2 is usually expressed (switched on) in humans. Simon Fisher, who first discovered the important role of FOXP2 and contributed to the study, says, "This shows, for the first time, that the [human-specific] amino-acid changes do indeed have functional effects, and that they are particularly relevant to the brain."

Foxp2 is active in organs all over the body but for all appearances, the mice that carried the humanised gene were as healthy, fertile and long-lived as their normal peers. Enard put the mice through a battery of over 300 tests to check their health, physical state, mental abilities and so on; the only difference he found was a reticence to explore new territory on the part of the altered mice.

The subtle differences in the altered mice also show that despite Foxp2's presence throughout the body, the two human-specific amino acids only affect the gene's activity in the brain. They also show that the human version still works in its new setting; for comparison, mice that lack Foxp2 at all, or carry faulty copies, die weeks after birth.

In fact, Enard found that the mice with the humanised Foxp2 gene often behaved in completely opposite ways to those that lacked working copies altogether. The former were less exploratory than usual and had high levels of the signalling molecule dopamine throughout their brains. In their basal ganglia, the mice with the humanised gene had neurons with longer outgrowths (dendrites) and were better able to strengthen or weaken the connections between them. This process, called synaptic plasticity, is vital for learning and long-term memory. In contrast, mice that lacked a copy of Foxp2 were more exploratory, had higher levels of dopamine and had basal ganglia that were full of neurons with shorter dendrites and poorer synaptic plasticity.

"It is unclear how these changes relate to each other," says Fisher, "but further studies of the mice should help to connect the dots." For the moment, it's certainly interesting that the humanised Foxp2 gene affected the basal ganglia more than other parts of the brain, for this region is particularly important in the FOXP2 story. People who have a faulty version of FOXP2 have problems with the structure of their basal ganglia and how well the region works. FOXP2 is inextricably tied to the region in other species too - if you knock out the gene in the basal ganglia of young finches, they can't accurately learn the songs of their tutors.

The area is also very important for language. Humans with lower levels of dopamine in the basal ganglia process the sounds of language faster and more accurately and our ability to understand the meaning of words depends on the activity of the basal ganglia's neurons. So it's entirely possible that the humanised Foxp2 gene changed the neurons of the mouse basal ganglia in ways that reflect aspects of speech evolution in humans. But Enard cautions it will take more research to confirm that. Currently, any such conclusions are mere speculation based on what we know about Foxp2.

Studies across the animal world (from mice to birds to bats) suggest that the gene is involved in neural circuits that allow animals to learn and produce complex patterns of movement. I've mentioned the effects in finches. The gene also affects the ability of mice to pick up new motor skills and has become very diverse in echolocating bats. Foxp2 seems to be more of a gene for general sensory-motor coordination than for language or communication in particular.

According to this idea, the two human-specific amino acid changes fine-tuned our motor control so that we could learn and coordinate the complicated motions of our lungs, tongue, lips and voice-boxes that underlie the spoken tongue. Enard says, "We are confident that concerted studies of mice, humans and other primates will eventually clarify if this is the case."

For now, it's intriguing that the humanised gene also changed the way the mice squeaked. When mouse babies are moved away from their nest, they make ultrasonic distress calls that are too high for us to hear, but that their mothers pick up loudly and clearly. The altered Foxp2 gene subtly changed the structure of these alarm calls. We won't know what this means until we get a better understanding of the similarities between mouse calls and human speech. But for now, it's telling that a recent study found that vertebrate vocals share a common neural circuitry, even among fish, and that the humanised Foxp2 didn't affect any organs outside of the brain. To Enard, that provides tentative support for the idea that the human-specific changes to the gene affect aspects of speech.

Also have a look at: