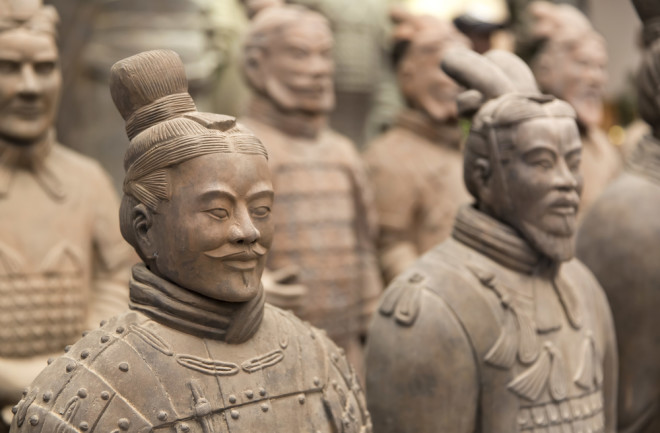 (Credit: lapas77/Shutterstock) To protect Chinese emperor Qin Shihuang in the afterlife, thousands of clay soldiers joined him underground some 2200 years ago. The discovery of this Terracotta Army in the 1970s was a great gift to archaeologists — and fans of "ancient lost technology" stories. The trope, which has some basis in fact, suggests that our ancestors were privy to some knowledge or technology that would still be useful, but has since been lost to the ages. When researchers discovered that this buried, ancient army of clay had remarkably preserved weapons, it was reasonable to wonder if the craftspeople at the time had treated them to avoid rust somehow. Chemical analyses showed that the arms contained trace amounts of the element chromium — an ingredient in stainless steel — and so for decades the thinking has been that Qin’s people had developed some cool kind of chromium-based anti-rust coating to put on their weapons. Well, new research appearing today in Scientific Reports shows that… maybe not so much. “The chromium anti-rust treatment theory should,” the international team of authors writes, “be abandoned.” The reasoning is simple: Chromium only appeared in a few weapons, had little to do with actual preservation and was likely related to an entirely different, and explainable, process. Instead, the authors propose some possible reasons for the weapon preservation that have actual evidence behind them.

The authors certainly had no dearth of artifacts to choose from. Archaeologists have recovered dozens of bronze spears, lances, swords, hooks and thousands of arrowheads from the life-sized terracotta warriors. And early research suggested that a “chromate conversion coating” (CCC) applied by the Qin craftspeople might indeed explain the weapons’ remarkable preservation. But prior studies had already begun to question the idea, albeit with inconclusive results, and today’s findings take aim at the CCC hypothesis by carefully examining the distribution of chromium among and within the ancient arms.

Detail from the grip and blade from one of the Terracotta Army swords. In most of the swords analysed, the highest concentrations of chromium are detected in the guard and other fittings, which would have been in contact with the lacquered organic parts. (Credit: Zhao Zhen) First of all, it turned out the chromium wasn’t even that prevalent. It only appeared in 37 of the 464 weapon samples the team studied — not the kind of wide-spread use you’d expect of a deliberate strengthening treatment. And the analysis also revealed an even bigger reason to distrust the CCC theory: The best preserved weapons weren’t even the ones with the most chromium, and vice versa. “There is no correlation between chromium presence and a given weapon’s state of preservation,” the authors write. So then, why is there chromium on the terracotta warriors’ weapons? After ruling out possible sources like the metal ores used to craft the weapons, pigments used to decorate them and contamination of the soil itself, the researchers turned to the element’s distribution within the weapons themselves. They saw it was usually restricted to the areas near pommels, handles and triggers, all of which were typically made of wood and would have been coated in lacquer. The treatment was used in China at the time, and the team showed it would contain chromium in enough quantities to explain the amounts still detectable on the weapons — but just the parts near where the lacquer would’ve been applied.

So now we know why there was chromium on the weapons, but what about the other main question: Why are they so well preserved? The authors have an answer to that, too, suggesting it’s a combination of the higher tin content in the bronze (which avoids corrosion) and the special soil the Terracotta Army was buried in. No one had thought to examine the soil before, but they showed that its slightly alkaline chemical composition and its relatively tiny particle size would prevent natural acids and organic matter from eating away at the metals. “In conclusion,” the authors boast, “the perplexing suggestion that Qin weapon makers used an arcane chromium-based technology to prevent weapon rust has been refuted. Efforts should be made to update museum displays and other popular literature about the site with this new information.” Sure, it’s a slight bummer that the Terracotta Army aren’t a cool example of lost technology from an ancient civilization. But the team’s exemplary analysis and reasoning do show off how the scientific method can work to effectively solve mysteries and answer long-standing questions, which in some ways is even cooler.