Scientists Find a Shipworm That Eats, and Lives Inside, Rocks 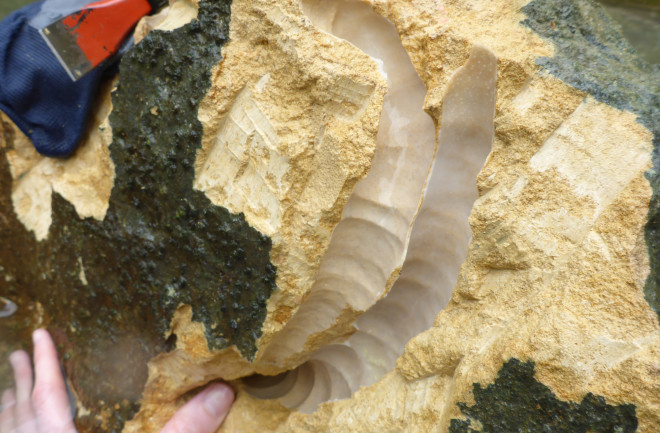 Unlike any other shipworm known to science, Lithoredo abatanica chews through, leaving behind twisted tunnels. (Credit: Marvin A. Altamia and J. Reuben Shipway)

Between a rock and a hard place? That’s just where Lithoredo likes it.

Researchers found the new-to-science shipworm, a kind of clam, in the Abatan River on the Philippines’ Bohol Island. It was a stunning sight.

“It is unlike any other shipworm, both in its appearance and its unusual habits, and this was apparent from the very first moment I laid eyes on it,” says marine biologist Dan Distel, executive director of the Ocean Genome Legacy Center at Northeastern University and senior author of the June paper describing the animal in the journal Proceedings of the Royal Society B.

Shipworms got their name because they bore through wood that’s in contact with water, eating the material. They leave behind tunnels lined with the calcium carbonate that they secrete, similar to the way their clam kin build shells. Shipworms have been a maritime plague for millennia, destroying boats and piers. But Lithoredo abatanica nibbled its way down a different evolutionary path. This shipworm eats rock.

Individuals such as this 4-inch-long specimen secrete calcium carbonate that hardens into a burrow lining. (Credit: Marvin A. Altamia and J. Reuben Shipway)

Distel’s field colleagues, acting on a tip from an earlier French expedition about shipworms apparently boring into the Abatan River’s bedrock, had to strap on snorkeling gear to search for the animals.

“[We] picked up these rocks, swam them over to the bank and proceeded to crack [them] open with a hammer and chisel,” says Reuben Shipway, the paper’s lead author and a marine biologist at the University of Portsmouth. “Splitting the rock open to reveal several shipworms inside was just so bizarre.”

Specimens of Lithoredo range from less than an inch to more than a foot long. Perhaps not surprisingly, given its unique diet, the animal lacks the sharp, wood-chewing pseudo-teeth of all its relatives and instead has broad, spatula-like chompers.

Holes in a piece of limestone made by the new species of shipworm. (Credit: Marvin A. Altamia and J. Reuben Shipway)

Finding the rock-eating shipworm raises a broader issue. Because the shell-like burrow linings of shipworms can survive in the fossil record long after the wood around them is gone, these tube-like structures have been used by researchers as a proxy for the presence of woody material in ancient environments.

Lithoredo’s dining preference for limestone means that scientists can no longer make such an assumption. The animals who left the linings behind might have just been rocking out.

“I think people tend to assume that nearly everything is known about the diversity of life on our planet, but nothing could be further from the truth,” says Distel. “The world is full of amazing creatures that have yet to be discovered, creatures that are stranger than fiction.”