Scientists finally figure out why whales like to jump out of the water. 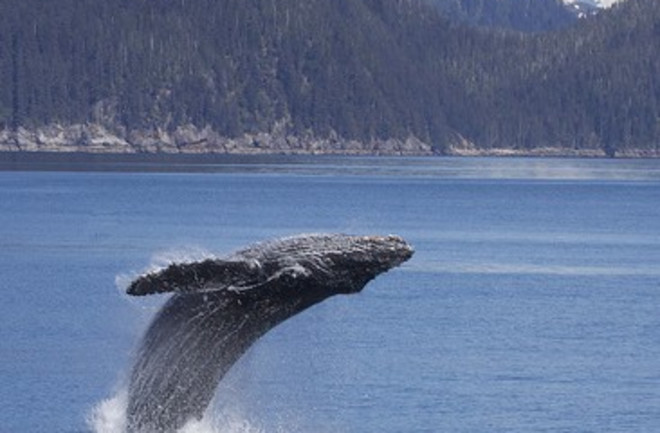 Even if you've never gone whale-watching or made it all the way through Moby Dick, you probably know that humpback whales are known for jumping out of the water and slapping the surface with their fins. But why whales engage in these "surface-active behaviors" has long remained a mystery... until now! These scientists watched 94 different groups of whales to discover that loud noises made by jumping and slapping the water may actually play a role in communication between nearby groups of whales. Yet another whale-related mystery solved!

Evidence for the functions of surface-active behaviors in humpback whales (Megaptera novaeangliae) "As part of their social sound repertoire, migrating humpback whales (Megaptera novaeangliae) perform a large variety of surface-active behaviors, such as breaching and repetitive slapping of the pectoral fins and tail flukes; however, little is known about what factors influence these behaviors and what their functions might be. We investigated the potential functions of surface-active behaviors in humpback whale groups by examining the social and environmental contexts in which they occurred. Focal observations on 94 different groups of whales were collected in conjunction with continuous acoustic monitoring, and data on the social and environmental context of each group. We propose that breaching may play a role in communication between distant groups as the probability of observing this behavior decreased significantly when the nearest whale group was within 4,000 m compared to beyond 4,000 m. Involvement in group interactions, such as the splitting of a group or a group joining with other whales, was an important factor in predicting the occurrence of pectoral, fluke, and peduncle slapping, and we suggest that they play a role in close-range or within-group communication. This study highlights the potentially important and diverse roles of surface-active behaviors in the communication of migrating humpback whales." Related content: Killer whales can learn to “speak dolphin”.Giant earwax plugs tell the life stories of blue whales.Flashback Friday: Researchers identify mysterious sounds first heard by 1960s submarines.