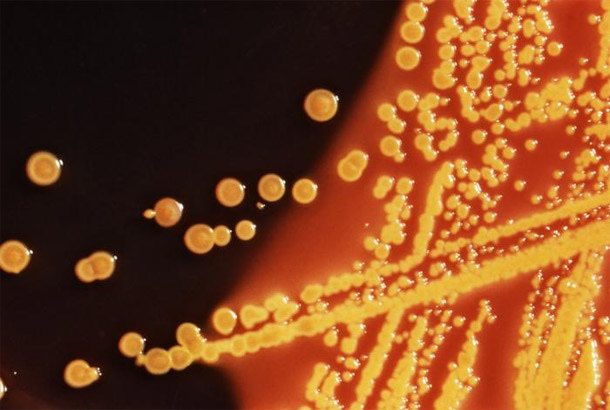 In a lab in Singapore, scientists are designing and breeding suicide bombers. If their efforts pan out, they will be applauded rather than jailed, for their targets are neither humans nor buildings. They’re bacteria. Nazanin Saeidi and Choon Kit Wong have found a new way of killing Pseudomonas aeruginosa, an opportunistic species that thrives wherever humans are weak. It commonly infects hospital patients whose immune systems have taken a hit. It targets any tissue it can get a foothold on – lungs, bladders, guts – and it often causes fatal infections. To seek and destroy this threat, Saiedi and Wong have used the common lab bacterium Escherichia coli as a sacrificial pawn. Their E.coli recruits produce a protein called LasR, which recognises molecules that P.aeruginosa cells use to communicate with one another. When LasR detects to these chemical signals, it switches on two genes. The first one arms the bomb. It produces pyocin, a toxin that kills P.aeruginosa by drilling through its outer wall and causing its innards to leak out. The second gene detonates the bomb. It produces a protein that causes the E.coli to burst apart, killing itself but also releasing a flood of deadly pyocin upon nearby P.aeruginosa. 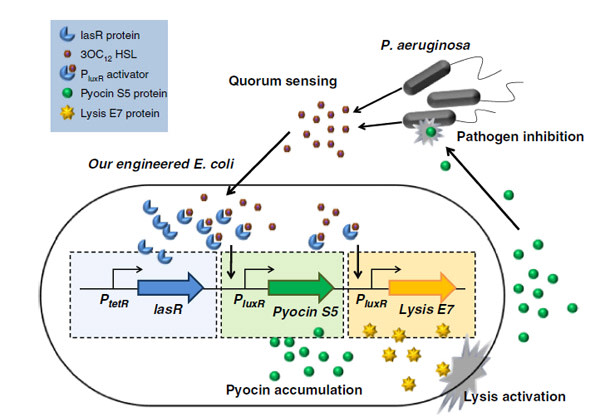 The beauty of this solution is that it uses P.aeurginosa’s own weapons against it. Pyocins are actually a P.aeruginosa innovation. When times are tough, these opportunists use pyocins to kill off competing strains. Saeidi and Wong focused on one of these weapons – a pyocin known as S5. It comes in two parts: one does the killing; the other makes the host cell immune to its own weapons. By arming their bombers with pyocin S5, Saeidi and Wong found that they could kill many P.aeruginosa strains that cause problems for hospital patients. In preliminary lab tests, the E.coli bombers proved to be remarkably effective against P.aeruginosa. When the two species were mixed together, the bombers took out around 99% of their targets. They even killed around 90% of cells in slimy communities of P.aeruginosa called biofilms. Biofilms are like bacterial cities and they are notoriously hard to destroy. The E.coli bombers levelled them. Of course, Saeidi and Wong’s method is a long way from actual clinical use. They haven’t even tested their suicide bomber bacteria in a live animal yet, much less in human patients. This is merely a proof of principle. Even so, it’s hard not to get excited about scientists exploring ingenious new ways of tackling infectious bacteria. We are, after all, losing the war against such microbes. The development of new anti-bacterial drugs has ground to a halt. The vast majority of antibiotic classes were created between the 1940s and 1960s, with only two new ones entering the market in the last decade. Meanwhile, bacteria have been evolving resistance to current arsenal, and people have already documented strains that resist virtually all of our known drugs. P.aeruginosa is particularly hard to treat because it’s already naturally resistant to a large variety of antibiotics. It has a number of molecular pumps that evict any drug that gets inside it. Doctors often try to treat it by hitting it with a number of different drugs, but it can shift to a dormant and tolerant state, where it survives by keeping its head down. Meanwhile, the drug onslaught harms helpful bacteria that normally colonise our bodies. As an alternative, some scientists have tried using viruses called phages, which target and kill bacteria. They’ve had some success in mice but Saeidi and Wong think that this approach has problems. It can only be used once – after that, the host developed antibodies against the viruses. Saeidi and Wong have taken a different approach. Their work is an example of the exciting field of synthetic biology, where scientists tweak biology to perform tasks that their natural counterparts cannot. Often, this involves knitting together natural components in new combinations, like picking parts off a shelf to create custom-built living things. In this case, Saeidi and Wong connected the genetic components for recognising P.aeruginosa, creating pyocin and committing explosive suicide, so that the first event would trigger the latter two. The field has produced some amusing parlour tricks as well as more useful achievements, including using bacteria and fungi to make antimalarial drugs, create biofuels, decontaminate water and even hunt cancer cells. But until now, no one has tried to send bacteria after their own kind. Saeidi and Wong’s study may be preliminary, but they have blazed a fresh and intriguing trail. Reference: Saeidi, Wong, Lo, Nguyen, Ling, Leong, Poh & Chang. 2011. Engineering microbes to sense and eradicate Pseudomonas aeruginosa, a human pathogen. Molecular Systems Biologyhttp://dx.doi.org/10.1038/msb.2011.55