“These events had major consequences for the history of humanity.” 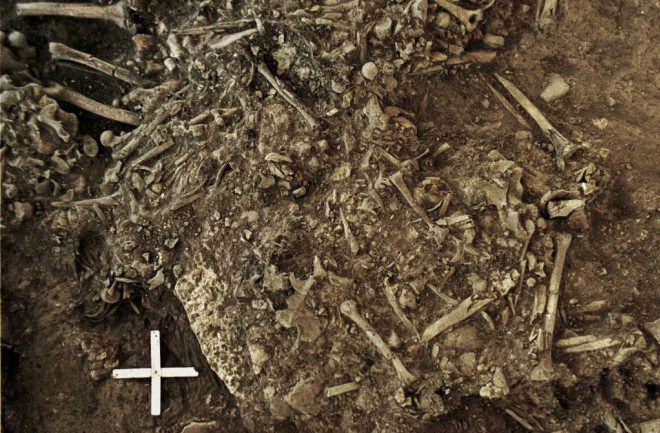 Scientists found evidence of an ancient plague in the bones of a woman buried among 77 other people from her village in western Sweden. (Credit: Cell Press)

Buried among 77 other people from her village in western Sweden are the bones of a 20 year-old woman. Now an analysis of DNA extracted from her teeth reveals what likely killed her. An international team of researchers has discovered the woman, who died some 5,000 years ago, had the oldest known case of the plague.

The finding suggests the world’s first plague epidemic took out her community and vast swaths of the Neolithic farming population in Europe. If confirmed, the notorious pathogen might be what allowed for the massive human migrations that followed.

“These events had major consequences for the history of humanity,” said Nicolas Rascovan, a bioinformaticist at Aix Marseille Universite in France, who led the new research. The migrations of peoples from the steppe of what is now Russia and Ukraine into Europe in the Bronze Age overturned the European gene pool.

“This is actually when the genetic makeup of the modern European is created,” said Simon Rasmussen, an evolutionary and systems biologist at the University of Copenhagen in Denmark who led the new study with Rascovan.

The migrations also likely brought in significant cultural changes, including the forerunners of half the languages spoken around the world today.

Rascovan and Rasmussen teamed up with archaeologists to figure out why huge Neolithic farming villages of 10,000 to 20,000 people were suddenly abandoned and burned. The large population density and subsequent population collapse gave them a clue.

“The settlements are the classic, textbook examples of a how a new pathogen can emerge or evolve,” Rasmussen said. Thousands of people lived close together with poor sanitation in near proximity to livestock and other animals. So, the team went in search of disease-causing bugs in publicly available ancient human DNA datasets.

What they found was a surprise. Unambiguous evidence for the bacteria, Y. pestis, that causes plague. When the team compared the DNA sequences of the newfound plague to other known strains and a related bacterium, Y. pseudotuberculosis, they discovered it is the most evolutionary ancient version, they report today in the journal Cell.

The variety of plague the researchers discovered was not kind that causes the bubonic plague, the scourge thought to be responsible for the Black Death—an epidemic that took out 30 to 60 percent of Europe’s population in the mid-1300s—but its far more evil twin, pneumonic plague. In contrast to the bubonic plague, which spreads via flea-carrying rodents, the pneumonic plague infects the lungs and can spread from person to person through saliva droplets. It is the deadliest form of the plague.

The team suspects trade networks, newly established thanks to the advent of wheels and other technologies, spread it. If confirmed, “it will have great impact because it will show a single bacterium had such a massive effective on our history,” Rascovan said.