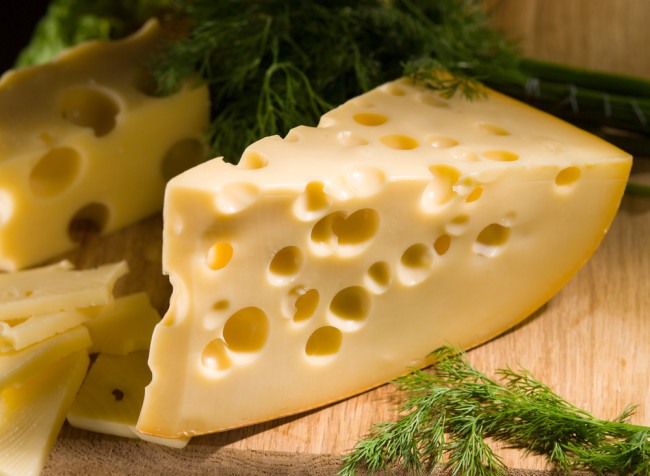 Sandwich lovers around the world will forever remember 2015 as the year scientists solved the great Swiss cheese mystery. After nearly a century of research, scientists in Switzerland — of course — have finally discovered why Swiss cheese has holes, and it has nothing to do with hungry mice. Rather, it's tiny flecks of hay that fall into the milk during production that give Swiss cheese its distinctive appearance, according to experts from Agroscope, a governmental agriculture research group.

In 1917, American William Clark became the first scientist to systematically study the origin of Swiss cheese’s holes, and he published a detailed paper in the Journal of Dairy Science. He concluded that carbon dioxide burps from microscopic bacteria floating in the milk. Still, Clark couldn’t provide an exact description of the bubble-forming mechanism, and ever since he published his landmark study, myriad researchers around the world have attempted to pin down the origin of Swiss cheese’s holes. But in a report released Thursday, experts at Agroscope believe they’ve solved this vexing scientific riddle. Scientists took multiple CT scans of Swiss cheese as it developed over 130 days to track where and how holes formed. They found that altering the number of hay particles in milk used to make cheese allowed them to control the number of holes that appeared. Disappearing Holes Their findings also explain why, over the past 10 to 15 years, Swiss cheese in the stores has fewer and fewer holes. Today, milk is filtered through modern-day milking machines, and it isn’t exposed to the barn’s open environment, so hay particles don’t get a chance to settle in the milk and form holes. “It’s the disappearance of the traditional bucket” used during milking, Agroscope spokesman Regis Nyffeler told The Guardian. We’ll see how long Agroscope’s hay particle explanation holds up, because other researchers, it’s safe to assume, are already searching for holes in the theory.