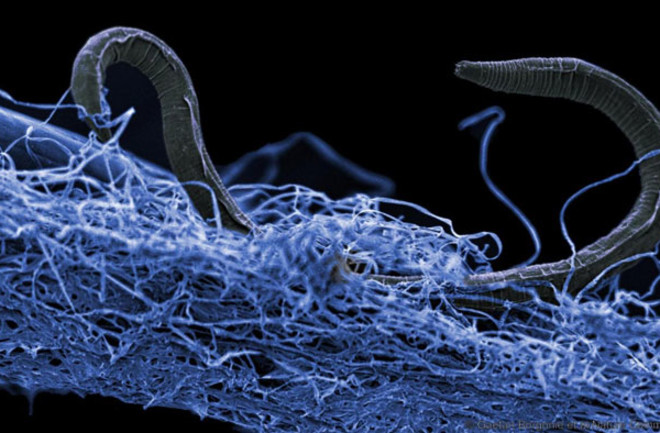 This unidentified nematode was found living in the Kopanang gold mine in South Africa, nearly one mile below Earth's surface. (Credit: Gaetan Borgonie/Extreme Life Isyensya, Belgium)

The dark, high-pressure depths of Earth’s interior is an unexpected place to find life. Now, an international group of scientists report there’s 16.5 to 25 billion tons of micro-organisms beneath the planet’s surface. The team’s work is redefining what a habitable environment is.

The discoveries “force us to reimagine what the boundaries are that life can exist in,” said Karen Lloyd, a microbiologist at the University of Tennessee in Knoxville.

Lloyd is a member of the Deep Carbon Observatory (DCO), a collaborative network of more than 1,000 geologists, chemists, physicists and biologists around the globe that is uncovering the life buried within the Earth. The group is on a decade-long mission to discover how the carbon stored deep in the Earth affects life on the surface.

The collaboration has revealed that life teems beneath the planet’s surface in a vast ecosystem scientists call “the deep biosphere.” A diverse mix of environments make up this other world beneath Earth’s crust, which encompasses a volume nearly twice as large as all the oceans combined. And surprisingly, life flourishes there, the researchers announced today.

“Every time we look in one of these disparate environments, we find living things,” Lloyd said.

The scientists probed hundreds of locations around the globe. They drilled a mile and a half into the seafloor and excavated gold and diamond mines in South Africa. So far, the deepest specimens of life come from more than 3 miles beneath the surface.

Much of the life researchers found beneath Earth’s surface is unlike what grows above. The masses of micro-organisms in the deep biosphere are as extreme as the environment they inhabit. Some microbes the researchers discovered can survive in temperatures up to 251 degrees Fahrenheit for example.

“That’s far above the boiling point of water,” Lloyd said. “In our brains, we think that should be the upper limit for what life can handle, but it’s decidedly not.”

Life in the deep has adapted in other unimaginable ways to its environment. Food is scarce in a world where hardly anything moves. When the scientists estimated how much energy the ecosystem uses, they found the organisms there can survive on hardly anything at all.

“It’s less than we thought would be capable of supporting life,” Lloyd said.

The team’s findings–published throughout the last nine years–will culminate in a final report due out next year. The discoveries will help scientists explore the potential for extraterrestrial life, the researchers say.