Scientists CT Scan An Entire Whale to Study Its Ears 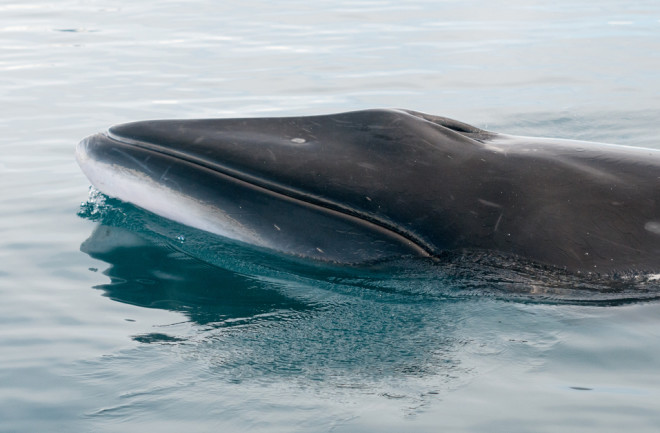 A minke whale surfacing. (Credit: Graeme Snow/Shutterstock) How do you get inside a whale's head? With a CT-scanner made for rocket bodies, that's how. Researchers from San Diego State University stuck an entire juvenile minke whale inside a computed tomography (CT) scanning machine to virtually slice and dice its anatomy with X-rays. Their goal was to get a look at the structures that allow whales to hear underwater and better understand a sense that's vital for these underwater mammals.

In the ocean, sight can only get you so far. In dim, murky ocean waters, sound offers much better insights into the environment. Dolphins and toothed whales use a version of sonar to visualize their underwater environment, and baleen whales like the minke whale use sound to both communicate and possibly to keep an ear out for potential threats. Unlike us, whales don't really rely on their ear canals to pick up on sounds. When you're surrounded by water, your whole skull becomes an antenna — it's why we can't tell where sounds are coming from underwater, and it's how whales pick up sounds. Whales have ear canals, but they likely don't use them. Their specialized inner and middle ears include bones that are entirely detached from the skull, which functions like the outer ear does in humans, and which help them determine where sounds are coming from. Getting an accurate picture inside a whale's head is difficult though, given their enormous size. The researchers caught a lucky break when they were able to obtain the body of a young minke whale that had beached itself and been euthanized. After a two-year wait in line at a CT-scanning facility usually used for solid-fuel rocket engines, the researchers were able to use the machine to get a full-body image of the 11-foot whale, and, crucially, its skull and ears.

What Do You Ear?

With the CT scan, the researchers were able to get a much better idea of what these structures looked like in minke whales. Analyzing the structure of hearing organs usually gives a fairly good estimate of what types of sounds they can pick up on. They did the same for fin whales in 2015, and the data in both cases is helping scientists narrow down what frequencies of sound the whales can hear and shedding more light onto how their ears work.

The whale is weighed and measured in preparation for its scan. (Credit: Ted Cranford) In the case of the minke whales, the researchers found that they were able to hear sounds of much higher frequency than was thought. While their hearing, as with most whales, is optimized for low the kind of low frequency sounds used to communicate across long distances in the ocean, they can also pick out higher frequency sounds, in the 10-40 kilohertz range, the researchers say. The researchers presented their findings Monday at the American Association of Anatomists annual meeting during the 2018 Experimental Biology meeting in San Diego. They think the sensitivity to higher frequencies serves a defensive purpose. Killer whales often prey on minke whales, and they communicate within this frequency range. Minke whales likely evolved the ability to hear these sounds in order to better avoid their predators. In addition, the ears' structure indicates that the minke whales probably hear sounds best when they encounter them head-on, something the researchers suggest the whales could use to determine the direction a sound is coming from. As the cacophony of human activities in the oceans increases, it's becoming more important for researchers to understand how sea life will be affected. Whales are particularly vulnerable, as things like ship propellers and sonar fall within their hearing range and could potentially overwhelm the sounds they need to pay attention to in order to survive. Knowing exactly how, and in what range, whales can hear will help researchers better protect these massive mammals of the sea.