There's a new way to predict daily fluctuations in the number of birds taking to the skies. The tool uses radar, machine learning and weather forecasts. 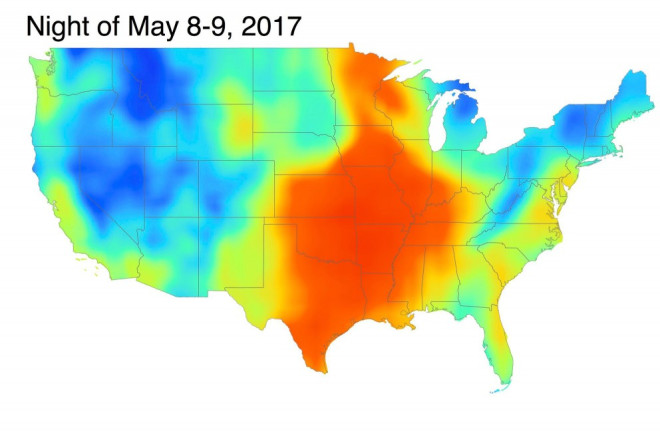 For many Americans and Canadians, a telltale sign of the changing seasons is a V-shaped flock of honking Canada Geese flying overhead during their migration.

These birds get attention for being large, common and noisy. But billions of other American birds migrate each fall and spring with hardly any fanfare, making their journey at night.

The cover of darkness protects migrating songbirds — like warblers, sparrows and orioles — from hungry predators like hawks. But their journey has different challenges: tall buildings, bright lights, and other dangers from humans.

These birds travel in huge pulses when weather conditions are favorable, sometimes with hundreds of millions traveling in a single night. But before now, it was hard to predict exactly where and when these pulses would happen.

Researchers announced Thursday in Science a new way to predict daily fluctuations in the number of birds taking to the skies. They developed the tool using a combination of radar, machine learning — a type of artificial intelligence — and weather forecasts.

Whether birds will travel on a given night depends on the weather. They want warmer temperatures and favorable winds.

“Birds are very attuned to short-term weather cycles,” says Benjamin Van Doren, a researcher at the University of Oxford who led the study. “One night (there might be) really nothing happening, and then the next night just a deluge of birds.”

“Since migration is so pulsed in this way, we can identify the relatively small number of days that large numbers of birds are coming through, and target conservation actions like turning off lights,” says Van Doren.

To study the relationship between bird activity and weather, the scientists first needed a whole lot of bird data. They turned to a bank of historical radar data.

“People have been using radar to study birds since radar was invented around World War II,” says Van Doren. “It’s become more and more advanced, and covered more and more area, and had greater and greater reach over time.

Now, scientists are finally able to fulfill a long-standing vision: tracking migration on a continental scale.

For those of us who aren’t ornithologists, we know radar best from weather forecasting. When you see the weather radar, though, meteorologists have removed the “clouds” of birds that show up during migration season.

To do the new research, the scientists first had to do the opposite: remove precipitation from the radar to look at just the birds.

Kyle Horton, postdoctoral researcher at the Cornell Lab of Ornithology and co-author on the paper, taught a computer how to do this by showing it radar images that he first manually labeled as precipitation or birds.

He then used “machine learning” to let the computer figure out on its own what characteristics were best to distinguish the two. This let him automatically remove clouds from the piles and piles of radar data, a task that would’ve been too huge to do manually.

The researchers could then use the radar data to look at birds’ response to weather fluctuations on a whole new scale. They looked at migration patterns across the entire U.S. for the past 23 spring migration seasons on a day-to-day basis.

And once they understood the patterns from the past, they were able to work on a tool to predict the future.

“This has been 20 years in the making,” says Andrew Farnsworth, another Cornell Lab of Ornithology researcher not involved in this study.

“There’s potential for cool biology to come of it, and real application to conservation,” Farnsworth says. “The potential implications are huge.”

Farnsworth and Horton penned a New York Times op-ed earlier this week about the deadly effects of city lights on migrating birds in advance of the annual 9/11 Tribute in Light. The Tribute shoots columns of lights into the sky that trace the outlines of the Twin Towers.

Birds are attracted to lights at night, for reasons not yet understood. This results in disorientation and deaths from collisions with buildings.

The New York City memorial, which happens to coincide near peak fall migration, was once particularly devastating to passing birds. But for the past few years, researchers have teamed with officials to reduce its impact dramatically by simply shutting it off for a few minutes whenever too many birds were “entangled” in confusion in the lights.

This is exactly the sort of conservation fix that could help migrating birds passing by lit cities nationwide. With the new research, where and when these and other efforts would be most impactful can now be predicted in advance.

Farnsworth estimates that the bulk of the migration occurs over just a 10-day period. Van Horen says these numbers are something else they’ll be able to estimate more precisely with their new dataset.

“Convincing municipalities and people, at both scales, to change their behaviors is not easy,” explains Farnsworth. “But it’s such a small percent of each spring and fall when a huge percentage of these birds are moving.

“We now have a unique opportunity to really think hard about how to do this kind of dynamic conservation, which is new.”

Farnsworth, Horton, and Van Doren were all in New York City Tuesday night for the Tribute in Light. They report that the lights were shut down only twice. The first was due to a large concentration of disoriented birds; the second was due to the death of an American Redstart.