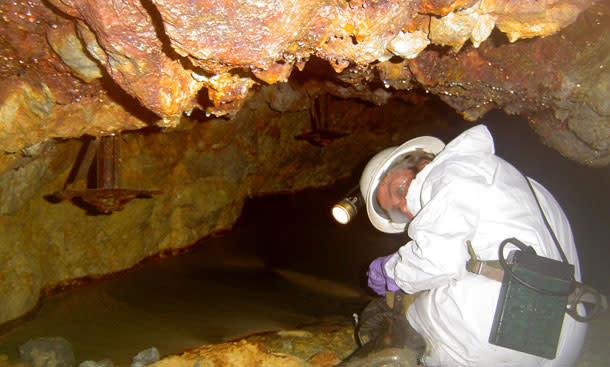 For almost a decade, Jillian Banfield has been travelling to a place that “pushes the limits of human endurance” – Richmond Mine in Northern California. Its abandoned caverns can reach 48 degrees Celsius and 100 per cent humidity. They are low in oxygen. They contain possibly the most acidic naturally occurring water on Earth, with a pH value of -3.6. But even in these conditions, there is life. Bacteria grow within the cave, floating in thin films on top of its hot, acidic water. They are the lords of their extreme world, and they provide an unrivalled opportunity to study how wild microbes evolve. The mine ecosystem is extremely simple. The dominant species is a bacterium called Leptospirillum that lives in sulphuric acid and eats iron. Only a handful of other microbes share the mine, and most migrants would simply die. This is an ideal community for keen scientists – it’s small, well-defined, not very diverse, and self-contained. “The fact that it's a simple, closed community makes it feasible to observe the evolution of the main players, without worrying about genotypes coming in from outside,” says Richard Lenski from Michigan State University, who was not involved in the study. The microbes are the reason why Banfield has repeatedly braved the toxic mine since 1995, recently joined by colleague Vincent Denef. To work in such harsh conditions, they need protective clothing. In the most oxygen-deprived regions, they can only work for a few minutes at a time. Even so, they have visited the mine several times a year and collected samples of Leptospirillum from several different sites. Now, they have analysed the DNA of their samples to chart the bacterium’s evolution. On average, the bacteria accrued 1.4 mutations in every billion DNA letters, each generation. That’s near the top end of what people estimated based on lab experiments. “All current estimates stem from organisms reared in the laboratory and there is uncertainty whether change occurs at the same rate in the wild. This study shows that similar rates apply,” says Martin Polz from MIT. The Leptospirillum strains that dominate the mine come in six different genetically distinct ‘genotypes’, numbered I to VI. Each type shares around 94 per cent of their DNA with the others – for comparison, we share 96 per cent of our DNA with chimps. Types II to VI are all branches of the same dynasty, which has lived in the mine for at least 50,000 years. Type I is a more recent arrival. Since the 1960s, it has repeatedly swapped genes and fused with the early colonisers to create the other five types. The first of these fusions happened in the late 60s and produced the Type VI bacteria. Two more fusions in the 1980s produced types IV and V, and another one about ten years ago produced type III. This is the one that dominates the mine today. Each of these events followed the same pattern. A late-colonising Type I microbe mingled with an early coloniser and transferred some of its genes across (which is typical for bacteria). In the recipient cell, both sets of DNA merged to create a new type. In most cases, the descendants of that new hybrid then rose in numbers, until it dominated the mine. It’s not clear why each emergent hybrid managed to establish itself. It could be due to dumb luck. The Richmond mine environment changes from season to season. For example, an influx of water during the rainy season might have washed away some groups at random, and given others a competitive advantage. But Denef and Banfield found some telltale signs of natural selection at work in the bacterial genes. For example, the changes that accompanied the emergence of new types were unusually likely to affect control genes, which affect how other genes are used and activated. This suggests that the new types flourished because their hybrid genomes made them better-adapted to their environments. It’s even possible that humans were involved. We were still using Richmond mine until the 1990s, and more recent decades have seen extensive efforts at cleaning up its toxic waters. We could have changed the mine’s environments in ways that favoured some Leptospirillum lineages over others. However, as Banfield says, “We cannot directly connect specific historical events to specific evolutionary steps.” Denef and Banfield’s study shows just how quickly wild bacteria can evolve. By fusing their genomes together, they can diverge greatly in just a matter of years, and rapidly adapt to environmental changes. In a related editorial, Edward DeLong from MIT puts it beautifully: “It turns out that “genome” is a verb, not a noun—a process, not a product.” Other scientists have done something similar, albeit without descending into a toxic cave to do so. Since 1988, Richard Lenski has been growing 12 populations of bacteria in his lab, in constantly a refreshed set of 12 flasks. They’re now past their 55,000^th generation, and they’ve alreadytold us much about the nature of evolution. And last year, Tami Lieberman and Jean-Baptiste Michel showed how a bacterium called Burkholderia has evolved while infecting the same sets of lungs over 20 years. Lenski says that these studies show “the tremendous value of collecting and preserving time-series of microbial samples.” Rather than capturing a mere stills of bacterial diversity, these samples can show us the entire movie of life evolving under our noses. Reference: Denef & Banfield. 2012. In Situ Evolutionary Rate Measurements Show Ecological Success of Recently Emerged Bacterial Hybrids. Science http://dx.doi.org/10.1126/science.1218389Photo by Mitch Jones More on bacterial evolution