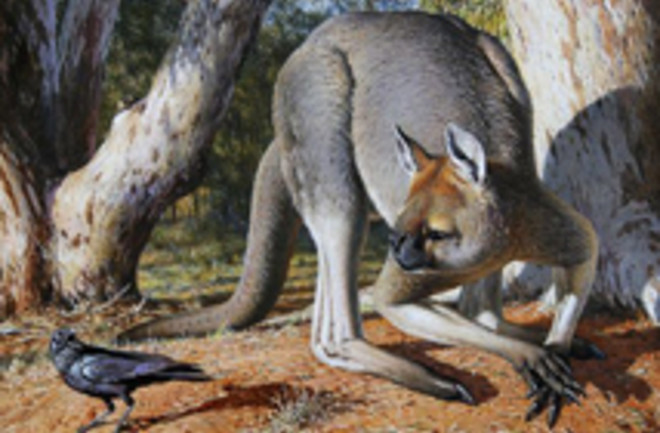 The giant, prehistoric kangaroo that once hopped over the Australian landscape may have been wiped out by the first human settlers on that continent, a new study argues. In making this claim, the researchers are entering into a long-running debate over whether Australia's "megafauna," which also included marsupial lions and hippo-sized wombats, were driven extinct by the changing climate or by overzealous hunting. And while the new study, which will be published in the Proceedings of the National Academy of Sciences, makes an interesting case for the latter hypothesis, some researchers are not convinced. Researchers analyzed the teeth of the nearly seven-foot-tall kangaroo, known as Procoptodon goliah,

to determine what it ate and drank. Different sources of water and food leave trace amounts of particular types, or isotopes, of hydrogen and carbon atoms, which are deposited in the teeth like a recorded diet. Additionally, tiny patterns of wear give clues about the type of food a given creature chewed. The team concluded that the giant kangaroos fed mainly on saltbush shrubs [BBC News].

These hardy bushes thrive in arid conditions, which makes it less likely that the kangaroos ran out of food as the continent's climate got hotter and drier. P. goliah is thought to have gone extinct about 45,000 years ago–that's

5,000 years after humans are thought to have first arrived in Australia. The high intake of saltbushes would have meant the giant kangaroo drank more water and would have been frequently found at waterholes and therefore vulnerable to hunters. These combined factors led the scientific team to determine that “human hunting was a more likely extinction cause”. Unlike its modern-day relatives, the giant kangaroo was very big and imposing and not as agile. “These were a lot slower and gravitated towards waterholes, so they were basically sitting ducks for the humans," [The Times]

, says lead researcher Gavin Prideaux. Archaeologist Judith Field is one of the skeptics of the new study.

Her main concern is that there is no direct evidence showing the kangaroo was hunted by humans. "If you're going to make any case about humans and these megafauna then you've got to have them in the same place in the same time," she says. "You've got to find archaeological sites that have megafauna in them with evidence of butchering. And we just don't have these," [Australian Broadcasting Corporation].