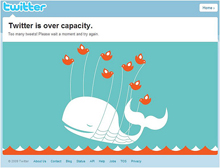 : Bane of employers ... but friend of science? At a scientific meet-up in California this week, researchers with the U.S. Geological Survey proposed that the 140-character micro-blogging site could help to speed up responses to earthquakes.

“Why would such a system work?” asked Paul Earle, a geologist at the USGS, at the American Geophysical Union fall meeting Monday. “Because people like to tweet after an earthquake" [Wired.com]

. While it can take scientists up to 20 minutes to process the wave of information that hits their instruments after an earthquake, Earle says, people start tweeting immediately, often with tags like "#earthquake."

A prototype system aggregates tweets based on key words such as "earthquake" or the equivalent in different languages. It can then send an e-mail listing the cities where the tweets came from and what the tweets said [AP]

. Earle's project isn't the first to suggest that Twitter's method of spreading info around the world within seconds could be invaluable during an emergency. But his team's system runs into the same problems as others, especially sorting through the clutter of tweets.

"Because there is a lot of noise in this data and we don't believe this system could ever be used to initiate a critical response such as shutting down a nuclear power plant, but what it may do is give us an initial heads-up in a region which doesn't have a dense seismic network that further scientific evaluation is needed," said Dr Earle [BBC News]

. Just as long as the spike in earthquake-related tweets doesn't bring a visit from the fail whale. Related Content: 80beats: Attack That Took Down Twitter May Have Been Aimed at Just One Blogger 80beats: Twitter Security Breach Reveals Confidential Company Documents 80beats: Researcher Updates His Twitter Feed Using Only Brain Waves Discoblog: My Water Broke! Time to Twitter!