A century ago, Congress created the national park system — and ended up preserving some of the best research sites in the world. 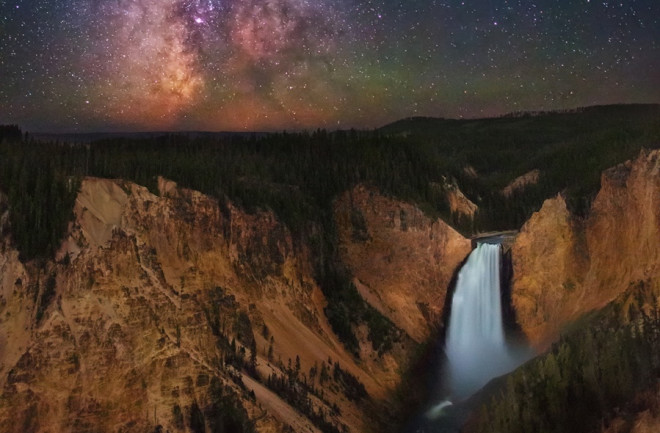 Ten miles into Death Valley’s Johnson Canyon, the recreational hikers had thinned out, but Kelly Iknayan was still on the trail, scouting the grizzled landscape for birds.

More than 100 years ago, zoologist Joseph Grinnell, the first director of the Museum of Vertebrate Zoology at the University of California, Berkeley, visited this same spot as part of a massive baseline study of California’s birds and small mammals. Iknayan, a Berkeley Ph.D. candidate, is following in Grinnell’s tracks, surveying birds in Death Valley, Mojave and Joshua Tree national parks as part of a broader 10-year-old effort by UC Berkeley scientists to see how those fauna are faring in the age of climate change.

Iknayan may have been a solitary figure in a remote part of Death Valley that day, but she is hardly the lone scientist working in the United States’ 408 national parks. Hundreds don hiking boots, waders or snowshoes every year to conduct research in the parks, from the Florida Everglades to Alaska’s Denali.

Steven BeissingerThe National Park System contains some of the most intact landscapes in the world, making it a boon to scientists who study the natural environment. Take geysers, for instance: Half the world’s geysers have been destroyed, but geologists can still study them in the protected environment of Yellowstone National Park. The same holds true for many imperiled species, from Yellowstone’s bison to Big Bend’s Rio Grande silvery minnows, both the subjects of important studies.

Few people would deny the value of national parks now, but these national treasures were hard won. Before the National Park Service’s (NPS) official founding in 1916 — 100 years ago in August — there was debate about whether the natural resources in these lands should be managed for economic gain or preserved to provide a necessary respite for the soul, as naturalist John Muir said. At the prodding of Muir and other advocates, Congress chose preservation.

But even the national parks, which enjoy the highest level of protection in the world, are not immune to human impact. In fact, much of what we know about climate change’s effects on ecosystems comes from research within park borders.

“Observation of melting glaciers in Glacier National Park and North Cascades National Park has contributed to the global database that tells us glaciers are receding and human climate change is the cause,” notes Patrick Gonzalez, NPS’s national climate change scientist. Research at other parks investigates a wide range of other environmental threats, including air and noise pollution and invasive species.

Many research projects conducted within the parks aim to help conserve these iconic ecosystems — no easy task, given how much they’re changing. “Over the past century, the typical approach to conservation was to try to preserve historical ecological communities, but it’s challenging to do that when conditions have changed so much,” says Steve Beissinger, a UC Berkeley conservation biologist who helped organize a conference last year on science in the national parks. “We might not be able to keep glaciers in Glacier National Park. Instead, we may have to manage for change based on projected future conditions.”

From mountains to seashores, scientists are turning our national parks — called America’s “best idea” — into outdoor laboratories, deploying their own best ideas for understanding the natural world and how we affect it. Here, we highlight 10 key research projects underway at parks around the country.

Can Removing a Dam Resurrect a River?

The Elwha River rushes through the gap where Glines Canyon Dam once stood. Just after this photo was taken in 2014, the final piece of the dam was removed.Steve Ringman/Seattle Times

One hundred years ago, the Elwha River, which flows through Olympic National Park, was a sort of paradise for salmon, especially chinook. Back then, they reputedly weighed up to 100 pounds. But when an entrepreneur named Thomas Aldwell built a dam for hydroelectric power without the fish ladders that allow salmon to surmount the dam — even though state regulations required them — most of the fish were cut off from their spawning grounds upstream. At the same time, sediment that would have flowed downstream and formed sandbars and eddies built up behind the dam, completed in 1913, and another constructed later. The entire riverine ecosystem suffered.In this 2014 photo, a newly freed Elwha River carries sediment into the Strait of Juan de Fuca.Elaine Thompson/AP/CorbisIn 1992, at the behest of scientists and conservationists, Congress passed a law to restore the Elwha River. The park service decided to remove both dams over three years to free the river — and the 21 million cubic meters of sediment that had built up behind them. Park officials set off the final explosion in 2014.

In this 2014 photo, a newly freed Elwha River carries sediment into the Strait of Juan de Fuca. Elaine Thompson/AP/Corbis

As they hoped, the river carried away the sediment and deposited most of it in the Strait of Juan de Fuca, the body of water that connects Puget Sound to the Pacific Ocean. Chinooks have been seen in the upper watershed for the first time in 100 years. Research hydrologist Chris Magirl from the U.S. Geological Survey has studied the impact of this huge release of mud: how it changes water flow and turbidity; how the salmon use the sediment to build nests; and how quickly the water clears up.

The benefits of what he’s learning on the Elwha ripple beyond the park. Magirl was called in to consult on the fatal mudslide in Oso, Wash., in 2014 to make sure a second landslide didn’t bury the 1,000 rescuers who rushed to the site. “Many of the scientific tools we used on the Elwha about massive releases of sediment were applied to Oso,” Magirl says.

Land managers use prescribed fire, like this 2003 burn in Yosemite, to keep overgrowth at bay.Tara Tanak

A century ago, visitors to the West’s forests trod a mosaic of sun and shadow, navigating stands of large trees and open spaces. Today, a walk in the woods is a dimmer experience. Many forests are crowded with trees, and branches obscure the sky. This new denser forest structure is an artifact of 82 years of snuffing out fires across the region.

Before the age of fire suppression, wildfires regularly moved through forests — every few years in some, every few decades in others — keeping new growth in check. The result was often a clumpy forest structure with thick stands of large trees separated by open spaces, which forest scientists later learned tends to slow down the speed and intensity of future fires. Today’s forest managers are trying to return forests to some semblance of their historic open structure by removing trees that have sprouted up in the absence of fire, through mechanical thinning or controlled burns. Those open spaces serve as natural firebreaks, helping to prevent high-intensity fires.

Toward this goal, Van Kane from the Forest Structure and Dynamics Lab at the University of Washington’s School of Environmental and Forest Sciences is studying how fire has changed forest structure in Yosemite National Park. Kane uses a remote sensing tool called LIDAR, which beams laser pulses over the landscape from a plane. The reflection from these pulses — off treetops, foliage and branches, all the way to the ground — reveals both the vertical and horizontal array of vegetation below.

With this information, Kane can assess forest patterns before and after fires over much larger areas than previously possible. His research shows that all fires are not the same: Severe, superhot fires will kill many trees, but low- and moderate-severity fires can return the forest to a healthy state.

“We’re showing that if you let the moderate fires burn, they will do a good job of restructuring forests and making them overall more fireproof,” Kane says. “We have data over tens of thousands more acres than previously, and we can really look at the patterns and build up statistics.” Kane says the work is helping forest managers improve fire management strategies.

Restoring the ‘River of Grass’

Scientists have breached this levee to allow water to move between the basins it divides. They track the flows with fluorescent dye.

Age Fotostock/Alamy Stock PhotoFlorida’s Everglades — the “river of grass” — once covered nearly 4,200 square miles. Humans began to constrict and alter this incredibly rich ecosystem in the early 1900s, when parts were drained for agriculture and urban development. In recent decades, people have come to recognize the many benefits of this vast sheet of wetlands, 100 miles long and 40 miles wide, which provides water to 7 million people.

A Wetland DividedHistorically, water in the Everglades flowed freely across much of South Florida (left). Urban development, agriculture and levees have shrunk and diverted the “river of grass” (center), but scientists hope to restore a large swath of it (right).Everglades NPS

Congress has mandated the restoration of the Everglades, but it’s unclear how to bring back enough of the system’s natural flow to return the ecosystem to health. U.S. Geological Survey hydrologist Jud Harvey and colleagues are studying the impact of restored flow in a 2-square-mile section of the Everglades where a levee has been breached. In 2014 and 2015, Harvey and his team boosted flows from November to January each year. The hope is that these pulses of water will pick up organic sediment particles from sloughs and deposit them on ridges, restoring the patterns that supported diverse flora and fauna in the past.

“It’s been exciting to open the floodgates,” Harvey says. “We can’t restore the Everglades to pre-Columbian times, but we’ll be able to make some decisions about how much flow we need for a big increase in benefits.” Harvey’s work has implications for stream and wetland restoration around the world.

How Has Climate Change Altered the Distribution of Native Animals?

In 1908, biologist Joseph Grinnell began conducting a survey of birds and small mammals in the West and tracked their distribution and ecological niches. At the time, he said the value of this work — conducted for the Museum of Vertebrate Zoology at UC Berkeley, where he was director — would not be appreciated for a century, assuming the materials were preserved for students of the future.

Today, Berkeley conservation biologist Steven Beissinger well appreciates the value of those surveys. “We are those students of the future!” he says. He and his colleagues use Grinnell’s data to understand how climate change has affected the distribution of these species.

So far, after conducting studies in Yosemite, Sequoia, King’s Canyon and Lassen Volcanic national parks, they’ve found a perplexing jumble of migrations. While the team observed some consistent upward shifts in range to cooler areas, they also found that some species didn’t move, and that others even migrated downslope. “Climate change is lumpy,” says Beissinger, who is also studying more arid sites such as Death Valley, Mojave and Joshua Tree. “We still don’t see a simple way to predict what some of the effects of it will be.”

Once Beissinger and his team better understand which species are moving and why, park managers may be able to help species survive by removing barriers to their dispersal to different elevations or by relocating them to more suitable habitats.