Science in a Post-Brexit World

What will be the effect on research in the U.K.? 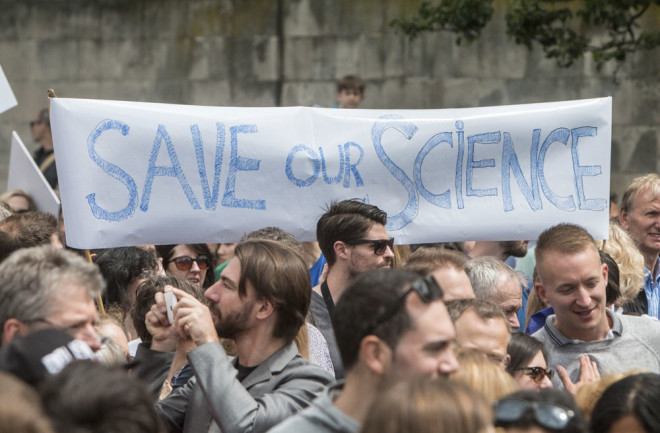 A banner at an anti-Brexit protest in the United Kingdom on June 23, the day of the referendum, sums up fears that research would suffer in a post-EU nation. | David Callan/iStock

British scientists could be forgiven for feeling gobsmacked on June 24. That’s the day they woke up to find out voters in the United Kingdom effectively had told their neighbors across the Channel to kiss off, electing to leave the European Union in a nationwide “Brexit” referendum.

Their mood hasn’t improved much since. The U.K.’s science sector had long been a big beneficiary of membership in the 28-country political and economic union: Between 2007 and 2013, Britain received 3.4 billion euros (currently about $3.8 billion) more than it contributed in funding for research and innovation. The EU’s open borders made it easy for scientists to relocate to the U.K., now home to more than 18,000 scientists from other EU countries. And EU membership made participation in major projects like CERN and the European Space Agency logistically possible.

A banner at an anti-Brexit protest in the United Kingdom on June 23, the day of the referendum, sums up fears that research would suffer in a post-EU nation. | David Callan/iStock

That all may change, and soon. Since the vote, British researchers have reported pressure to back out of joint funding applications, and graduate students are rethinking academic careers in the U.K. “Collectively, Europe is the world’s scientific superpower, and the U.K. was leading it,” says Mike Galsworthy, a British researcher who co-founded the group Scientists for EU in the run-up to the vote. “Now we’ve been hauled out of the driver’s seat.”

The coming months will be critical. Barring a political upheaval that reverses course completely, the best-case scenario for British science may be a mix of increased funding at home and new treaties that preserve the U.K.’s access to EU collaborations. It’s also possible that foreign researchers already working in the U.K. could stay, “grandfathered in” to any post-Brexit arrangement.

Access to EU programs likely depends on Britain keeping its borders open, though. It’s a core European demand but a tough sell for British politicians, since many “Leave” voters were motivated by unhappiness with immigration. If that fundamental conflict can’t be resolved, the worst-case result could be an exodus of top talent. In today’s competitive science scene, that could be a bigger blow than funding cuts.