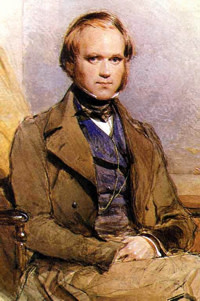 On my first full day blogging at Discover, things are a bit chaotic, but I'd be remiss not to take a second to observe the 150th anniversary of natural selection's debut. It was today in 1858 that members of the Linnean Society listened to a paper from Charles Darwin and Alfred Wallace, each proposing that species adapted to their environment as some individuals reproduced more than others. And so begins a marathon of Darwin celebrations that's going to rage on for sixteen months--on to the 200th anniversary of Darwin's birthday in February and to the 150th anniversary of the publication of the Origin of Species on November 24. I'm a little weary just thinking about it all. I hope it doesn't turn into overkill, and I hope people take the opportunity to delve into the history of Darwin's achievements, rather than just polish up their old myths about the origin of evolutionary biology. The history of science is full of surprises, as historians discover that things in the past are not as they once may have seemed. For example, Newsweek's cover story this week takes a look at Darwin and Lincoln. (The two men were born on the same day in 1809.) The author, Malcolm Jones, writes how Darwin first came up with the rough outlines of his theory of evoution in the 1830s.

As delighted as he was with his discovery, Darwin was equally horrified, because he understood the consequences of his theory. Mankind was no longer the culmination of life but merely part of it; creation was mechanistic and purposeless. In a letter to a fellow scientist, Darwin wrote that confiding his theory was "like confessing a murder." Small wonder that instead of rushing to publish his theory, he sat on it-—for 20 years.

Jones repeats a popular story here (one that I've told myself). But it doesn't hold water anymore. John van Wyhe, a Cambridge historian, has tested the "scared-into-silence" hypothesis against Darwin's vast paper trail, much of which has only been coming to light recently. As Wyhe wrote last year in the Notes of the Royal Society of London, the notion that Darwin kept his theory a secret "is overwhelmingly contradicted by the historical evidence." Darwin did not act like a man with something to hide. Passages "like confessing a murder" may sound scandalous, if you forget about Darwin's sly way of making fun of himself to his friends. Wyhe concluded:

Instead of a man afraid of his secret theory's being revealed to his prejudiced contemporaries, it is demonstrated that Darwin was understandably very busy and began his species book when he had completed work in hand, just as he had intended all along.

So in this time of Darwin celebrations, let's try to get to know the scientist as he really was. A good place to start is Whye's paper, which is available for free here. [Update: Fixed a couple typos--thanks to the collective copy-editing hive mind!]  [Image via Wikipedia]