Save the sashimi: rising mercury levels in Hawaiian ahi indicate a global problem 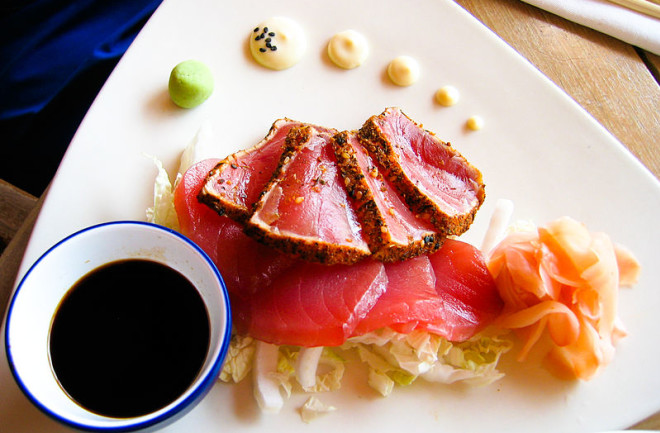 Broiled, blackened, seared or raw, ahi tuna is one of America's most popular seafoods. But a new study suggests toxic mercury levels in tuna are on the rise, and may cause serious problems in decades to come. Photo by Angelo DeSantis c/o Wikimedia Commons Tuna are some of the most popular fishes on Earth. Globally, more than 4.3 million tonnes of tuna are caught every year, valued at more than $5.5 billion dollars. Yellowfin tuna, the species most commonly labeled as ahi in sushi restaurants nationwide, is the preferred tuna in developed nations like the US and the UK, but the world's favorite sashimi may soon be stricken from the menu, as scientists have found that mercury levels in tuna are rising at a rate of 3.8% or more annually. More importantly, the rapid rise suggests a growing global problem that may lead to unsafe mercury levels in many fishes, even ones that are now considered completely safe. We've known that there's a lot of mercury in tuna for some time: The Natural Resources Defense Council's guide to mercury in sushi lists yellowfin tuna as a "high mercury" species. But fish contain healthy protein and Omega-3 fatty acids, too, so many have debated just how much mercury it takes to outweigh such benefits. The Food and Drug Administration (FDA), for example, recommends eating two servings of fish a week, but says to choose those that are "low in mercury" (lumping tuna into that group). In 2011, Consumer Reports warned that canned tuna mercury levels were more of a concern than agencies like the FDA had let on, and urged consumers to pay attention to mercury levels. A Chicago Tribune article flat-out accused the FDA of caving to industry pressure and removing tuna from the list of fish not safe to eat, but the FDA says there's just not enough cause for worry. Others, too, have downplayed the risk, saying that current levels of mercury in tuna are safe for consumption, and that consumers needn't worry about eating too much ahi. Whether current levels are safe is questionable, but all seem to agree that if the mercury in tuna goes up, it has the potential to become a major health problem. Mercury, particularly in the form of methylmercury, can be toxic to the body, particularly the nervous system. Children and fetuses are particularly at risk, as their brains are still developing, and some studies have suggested that eating fish while pregnant can lead to cognitive declines. As an estimated two and a half billion people rely on fish protein as a substantial part of their diet, increases in mercury content in species like yellowfin could be seen as a serious threat to global health. Certainly, with so many already urging caution with the levels in ahi now, any increases in mercury levels in these fish would have to be taken very seriously by regulatory agencies like the FDA. But a 2003 study examined data from 1971 and 1998 and suggested that mercury levels in tuna were stable, thus implying that there's nothing to worry about in the near future. That didn't make sense to Paul Drevnick, Carl Lamborg, and Martin Horgan, co-authors of a new study published in Environmental Toxicology and Chemistry. Mercury emissions have been on the rise, they noted, thanks in large part to coal-fired power plants and a dramatic increase in small-scale, river gold mining operations that use mercury in their extraction process. So they decided to revisit the previous data and include more recent numbers from 2008 in the analysis, also focusing on yellowfin tuna caught off the coast of Hawaii as previous research had. In addition, the team looked at the size of fish being caught, something that many said was missing from the previous study. Because fish can accumulate mercury over time, not accounting for the size (and thus age) of the fish is a big statistical misstep, as decreases in overall fish size are expected to have lower mercury readings to begin with. When the three scientists compiled all of the data, they found that mercury levels in yellowfin weren't stable at all — instead, they are rising, and quickly. The average mercury concentration went up from 0.2 parts per million (ppm) to over 0.3 ppm between 1998 and 2008, hand-in-hand with increases in mercury emissions. Most of the mercury was in the most toxic form to humans, methylmercury, thus such an increase is troubling, even though the 2008 levels were still considered safe to consume. "People should be worried about what the future will bring," Lamborg told the Hawaii News Now. If mercury values continue to increase at almost 4% per year, it would take less than 30 years for the average tuna to contain more than the FDA's action limit, the concentration at which the FDA considers a food dangerous enough to consider pulling it from the market. Not only would pregnant women and children need to be careful about eating ahi, as current guidelines suggest, everyone would have to weigh the risk of consumption against the potential for mercury poisoning. But what troubles the authors most is that while yellowfin are large, predatory species, they're not the top of the food chain. Their data suggest that just about any fish could develop unsafe mercury levels if our mercury emissions aren't decreased. “What this number is saying is that the amount of mercury in fish is getting higher and higher all the time, and if it keeps going like that, at some point, most every kind of fish is going to be potentially hazardous," Lamborg said. The authors applauded current global efforts (like the United Nations Environment Programme’ s Minamata Convention on Mercury) to reduce mercury emissions, but cautioned that "more stringent reductions in emissions are necessary." As for consumers, perhaps it's time to think about cutting down on our insatiable appetite for ahi. After all, in addition to mercury risks, many species of tuna are overfished or fished using destructive technologies according to the NRDC, so reducing the demand for tuna is probably better for everyone. Citation: