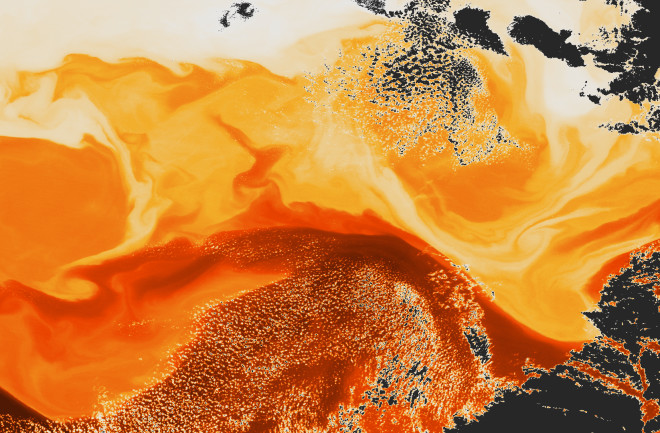 The Gulf Stream, as imaged in the infrared by NASA's Suomi NPP satellite. (Image: NASA & NOAA's Environmental Visualization Laboratory) Who knew the Gulf Stream looked like this — from space or anywhere else? The image was produced on April 16 by NASA's Suomi NPP satellite. It depicts the true complexity of what is often called a river a warm water that delivers heat from south to north in the Atlantic, and across the ocean to Europe. To my eyes, "river" is simply a misnomer. The infra-red image, covering an area about 180 miles east of Atlantic City, New Jersey, shows the warmest waters in dark orange. The National Oceanic and Atmospheric Administration says the temperature of these waters is an astounding 86 degrees F. Lighter colors indicate cooler waters, as low as 50 degrees. And the black areas in the image are clouds. The details of the complex ocean dynamics are no doubt scientifically important. But at the end of the day, this image is, quite simply, beautiful.