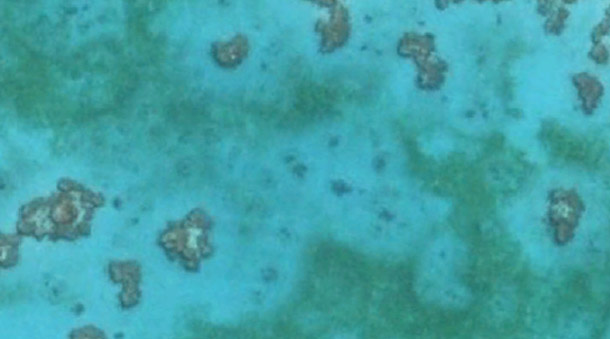 From the ground, Heron Island looks like it has materialised out of a holiday brochure. It’s home to pristine beaches and lazing tourists, all surrounded by the turquoise waters of Australia’s Great Barrier Reef. But there’s an aspect to Heron Island that doesn’t fit with this idyllic vibe. It’s what Elizabeth Madin from the University of Technology, Sydney, has dubbed a “landscape of fear”. To see it, you need to take to the air. Satellite images of Heron Island, freely available as part of Google Earth, depict the same vibrant colours. But around some of the reefs, there are distinct halos – light blue rings that encircle patches of rock and coral. These rings are caused animals such as fish and sea urchins, which munch on the algae and seaweed that cover the reef floor. These grazers hide from predators within the rocks and dart out to eat the surrounding algae, leaving behind a barren halo among an otherwise green landscape. Reef halos have been described for years. They’re not easy to study, but Madin found that she could look at them through Google Earth satellite images. After noting their coordinates, she confirmed the presence of the halos in person, by travelling to the right coordinates by boat and measuring the height of the surrounding algae. She even left behind clumps of algae, all grown to the same height, and found that anything within 9 metres of a patch reef was soon eaten. The halos are a sign of a healthy ecosystem. Their presence around Heron Island reflects the fact that half of the local reefs lie within a no-take marine reserve, where fishing is totally forbidden. In the other half, looser rules apply, but fishing is still kept at a minimum and the reefs are fairly inaccessible. Other places aren’t so lucky. As one example, a heavily fished reef next to Panggang Island in Indonesia has no traces of reef halos whatsoever. Madin thinks that the halos could act as a warning sign that something is wrong. By taking a series of Google Earth images of the same area over time, conservationists could remotely monitor the interactions between predators and prey from space. They could also track the effects of removing and reintroducing predators. It could be a cheap and quick way of checking up on the health of a protected area. The approach isn’t limited to coral reefs. It could also be used for any part of the world where predators affect the distribution of plants by posing a threat to their prey. In the Rocky Mountains, wolves were exterminated from Yellowstone National Park for 70 years, allowing elk to run amok and eat their way through a variety of trees. When wolves were reintroduced in 1995, the elk were forced to hide once again and the trees like willow and cottonwood started bouncing back. Elsewhere, in the Aleutian Islands between Russia and Alaska, the introduction of foxes converted the landscape from one dominated by lush grasses to one ruled by low-lying shrubs. The foxes killed the island’s seabirds, and the birds’ droppings – guano – was the main source of fertiliser for the island. All around the world, the dance between predators and prey is imprinted upon the landscape. And these signs can be viewed from up above to people with the right tools and inclination. Madin has both, and she proved her point by studying Heron Island’s reef halos. These distinct circles are a record of behaviour. Each one tells a story of fear and foraging, authored by thousands of animals operating independently. Reference: Madin, Madin & Booth. 2011. Landscape of fear visible from space. Scientific Reports http://dx.doi.org/10.1038/srep00014More on marine conservation: