Sand Tells Us the History of Mountains

You might find it on a beach thousands of miles from where it started, but sand can record the rise and fall of mountains that vanished millions of years ago. 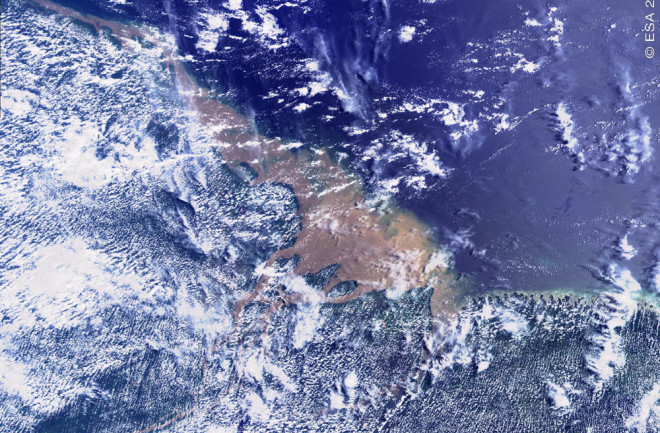 Everyone knows sand. Maybe you played with it as a kid, maybe you built castles on the beach, maybe you use it to make your walk less slippery. It is everywhere. There are seas of sand on our planet. It can be tan, white, green, black and more. Sand is economically valuable. To an Earth scientist, sand is also a vault, containing the history of long destroyed mountains, a changing climate and vast tectonic collisions.

Sand is a surprising specific thing, at least in the Earth sciences. For something to be sand, it has to be between 0.063 and 2 millimetres in diameter. Anything smaller is mud, anything larger is gravel, cobbles or boulders. Sometimes sand is all you will find, like in a desert. Sometimes that sand is mixed with pieces of varying sizes, like on a bar along a river.

When we look at sand particles, there are a bunch of characteristics that are important for understanding the source of the sand and what happened in its journey to where it was deposited. Many of these properties are created by the ways sand is moved: in wind and in water. Pieces of debris get rounded as they travel, bumping into one another, and also get sorted, where only pieces of specific sizes are left.

So, if you start with a big mountain range like the Andes, all the processes of weathering and erosion will break those monoliths down into tiny fragments by the time they are deposited in the sea. Mighty rivers like the Amazon carry all the debris from the mountains down to the oceans and with it, the record of pinnacles since destroyed.

The Rise and Fall of the Andes

A recent study by Cody Mason and others in Nature Communications examined just what the record might be from the Amazon. They collected sediment that had been deposited just offshore from the Amazon Delta in the Atlantic Ocean. This material has been deposited over millions of years and contain bits of rocks that come from much of South America.

They sought out zircon mixed in the sediments because zircon is resistant to changes caused by erosion and the thousands of miles of travel from their source to the ocean. Zircon also house a lot of radioactive elements, so they can be dated.

Take a pile of zircon and their ages, you can figures out proportions of potential sources for all this debris. Combine that with looking at helium in zircon (again, produced from radioactive decay), you can begin to understand how quickly these mountains that are the source of the zircon were destroyed.

It turns out that the helium ages of these same zircon crystals tell a different but related story. Most of these zircon were brought back to the surface and eroded (a process called exhumation) in the last few million years. This all supports the idea that the modern Andes have gone up -- and fast -- in the geologic blink of an eye. Mason and his colleagues found evidence of multiple exhumation events (cooling periods) where zircon were brought back to the surface interleaved with volcanically-active times (magmatic periods) that created new zircon.

Each of these zircon crystals can potentially record information on both the conditions the crystals formed -- magmatic processes in the crust -- and the path they took from in the crust to their final resting spot in the ocean -- erosion and metamorphism. That is cool in itself, but when you consider that the volcanoes and mountains being revealed might have been destroyed hundreds of millions to billions of years ago, we are quite literally seeing a past that no longer exists.

This is the closest we can get to a time machine. Sandstone and sediment collected the dismantled remains of giant mountain ranges. They might be from deep within the crust, brought back to the surface by tectonic forces. They might be from volcanic deposits that covered the land during massive eruptions that have long since been erased. The chemical artefacts remain, still waiting for us to uncover and peer into our planet's distant past.