Same gene linked to bigger brains of dolphins and primates 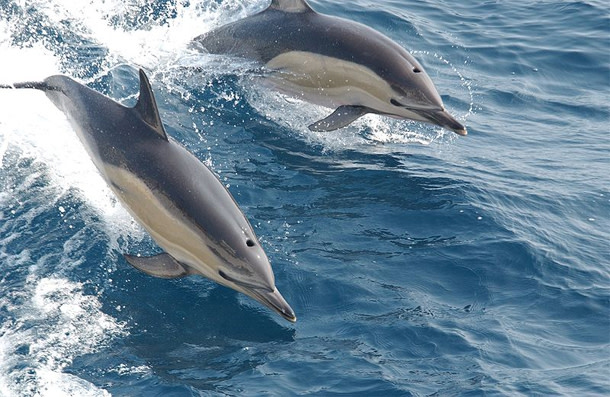 Every whale and dolphin evolved from a deer-like animal with slender, hoofed legs, which lived between 53 and 56 million years ago. Over time, these ancestral creatures became more streamlined, and their tails widened into flukes. They lost their hind limbs, and their front ones became paddles. And they became smarter. Today, whales and dolphins – collectively known as cetaceans – are among the most intelligent of mammals, with smarts that rival our own primate relatives. Now, Shixia Xu from Nanjing Normal University has found that a gene called ASPM seems to have played an important role in the evolution of cetacean brains. The gene shows clear signatures of adaptive change at two points in history, when the brains of some cetaceans ballooned in size. But ASPM has also been linked to the evolution of bigger brains in another branch of the mammal family tree – ours. It wentthrough similar burstsof accelerated evolution in the great apes, and especially in our own ancestors after they split away from chimpanzees. It seems that both primates and cetaceans—the intellectual heavyweights of the animal world—could owe our bulging brains to changes in the same gene. “It’s a significant result,” says Michael McGowen, who studies the genetic evolution of whales at Wayne State University. “The work on ASPM shows clear evidence of adaptive evolution, and adds to the growing evidence of convergence between primates and cetaceans from a molecular perspective.” For decades, we’ve known that similarities between primate and cetacean intelligence run deep. For a start, both groups have members with unusually big brains. We humans have brains that are 7 times bigger than you’d expect for an animal of their size. The equivalent number is 2-3 for chimps and some monkeys, and 4-5 for some dolphins. Over the last decade, scientists have identified seven genes that are linked to primate brain size. They’re called MCPH1 to MCPH7 (ASPM is the fifth in the line). Faults in these genes can lead to microcephaly – a developmental disorder characterised by a debilitatingly small brain. McGowen had already shown that, unlike in humans, MCPH1 doesn’t neatly correlate with brain size in cetaceans. Xu wanted to see if ASPM would be more interesting. He sequenced the gene in fourteen species of cetaceans, from the bottlenose dolphin to the minke whale. He then compared these to known sequences from 18 other mammals, including several primates and the hippopotamus (the closest living relative to cetaceans). Xu found that ASPM went through two periods of strong positive selection – where beneficial new versions of the gene spread through a population. The first coincides with the point when toothed whales (like sperm whale and dolphins) split away from the baleen whales (like blue, fin and humpback whales). Their brains got bigger. The second period marks the split of the toothed whales into the delphinoids (including all oceanic dolphins and porpoises) and all the others. The delphinoids’ already big brains got bigger still. Xu also found signatures of positive selection within the ASPM genes of primates, but not in any other mammal groups. During their history, both groups must have experienced some evolutionary pressures that meant bigger brains suddenly became advantageous. We can only speculate what these might have been. For cetaceans, the toothed whales evolved to navigate with echolocation, and may have needed a larger brain to process the information from all the returning echoes. The delphinoids may owe their larger brains to the mental demands of living in large, complex social groups. (Both hypotheses have been on the cards for some time, and Xu’s ASPM discovery doesn’t provide a smoking gun for either.) What does ASPM actually do? The gene is activated in neuroblasts, the embryonic cells that eventually divide into neurons. It helps to create structures in dividing cells that send a full complement of DNA into each daughter. If ASPM isn’t working properly, the neuroblasts cannot divide evenly, and brains get smaller. It’s not clear how the reverse happens – how changes in ASPM lead to bigger brains, but it’s now clear that this has happened in at least two mammal groups. Xu found certain mutations that were associated with the bigger brains of toothed whales, and others that are associated with the even bigger brains of delphinoids. What these mutations did is anyone’s guess, and something that will take a lot of experimental work to uncover. Here’s one critical nugget, though: they’re different to the changes you see in primates. The same gene may have enlarged the brains of both groups, but it did so in different ways. And undoubtedly, other genes were also involved. (To close, here’s possibly my favourite ever example of convergent evolution, which also involves cetaceans. Toothed whales and some bats both use echolocation, and their abilities depend on the same changes to the same gene – Prestin. This was discovered at the same time by two independent groups of researchers, one led by Yang Liu and the other by Ying Li!) Reference: Xu, Chen, Cheng, Yang, Zhou, Xu, Zhou & Yang. 2012. Positive selection at ASPM gene coincides with brain size enlargements in cetaceans. Proc Roy Soc B. Photo: Common dolphins by NOAAMore on brain convergence: