Salmonella gets its host to arm its secret weapon 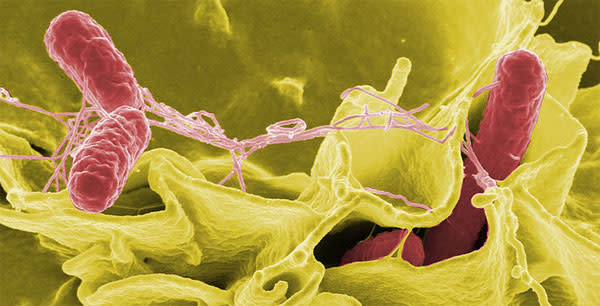 Bacteria wield all sorts of molecular weapons that allow them to infiltrate their hosts. But one microbe – Salmonella enterica – has a particularly devious trick. It uses weapons that arm themselves by manipulating the host’s own proteins. When this bacterium infects cells, it turns them into accomplices to their own downfall. S.enterica causes a variety of different illnesses including food poisoning and typhoid fever. There are over 2,500 different varieties and Chittur Srikanth from Harvard Medical School has been studying one called Typhimurium, which infects mice. In the first moments of infection, Typhimuriuminjects a small arsenal of proteins into its victim, which subvert its structure, defences and communications. One of these injected weapons is known appropriately enough as SipA, or Salmonella invasion protein A. It has two business ends, both of which pose a threat to a host cell. One of them causes a host protein called actin to clump together into long filaments. These act as guide ropes that help to draw Salmonella into the cell. The other end of SipA causes white blood cells to enter the lining of the intestines, leading to inflammation and diarrhoea – a symptom that allows Salmonella to spread from one individual to another. The problem is that SipA – in its initial form – doesn’t do either job very well. The protein needs to be split in two so that each end can go about its business separately. To do that, it recruits one of its host’s own proteins – a molecular executioner called caspase-3. Caspases cut up other proteins. Their hacking and slashing typically provides a way for damaged or unwanted cells to commit suicide, but they can also encourage cells to divide and trigger inflammation. Srikanth found that caspase-3 cuts SipA right down the middle, producing two proteins when once there was one. This is an essential event. When Srikanth engineered a version of SipA without the amino acids that normally attract caspase-3, the protein couldn’t be cleaved in two. As a result, Salmonella’s invasion was cut short. Infected mice showed no signs of inflamed bowels or symptoms of food poisoning. It might seem that Salmonella is unduly reliant on its host; after all, its weapon stays capped unless it gets a hand from caspase-3. But the bacterium takes a more active hand than that. Srikanth found that SipA actually activates caspase-3, producing more of the very protein that it needs to activate itself. This trick isn’t limited to SipA. Other proteins that are injected by Salmonella, and those from other gut bacteria like Escherichia coli and Shigella flexneri, also carry targets for caspase-3. And the majority of these proteins, like SipA, have two functions, with different ends performing different jobs. Srikanth thinks that the release of caspase-3 in the lining of the intestine may originally have evolved as a defence against invading bacteria, helping to kill or disarm the intruders. However, it seems that a whole host of bacteria have managed to subvert these defences, using the executioner protein to activate and double their own arsenal. Reference: Science http://dx.doi.org/10.1126/science.1194598More on infectious bacteria: