Said the Mouse to the Other Mouse, “Dude, You Would Not Believe The Colors I’m Seeing….” 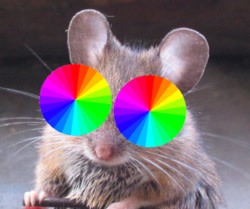