Roosters Have Special Ears So They Don't Crow Themselves To Deaf 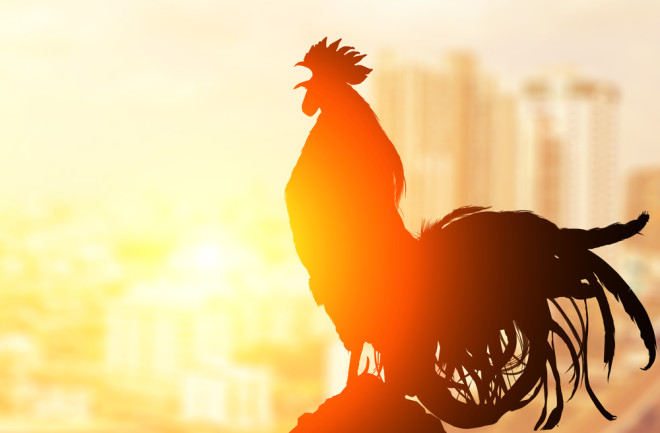 'Roosters have built-in earplugs that shut off their ears when they crow. Because of course they do. Photo Credit: <a href='https:

If you’ve spent any time around roosters, you know that their “morning” crowing can be… loud. That distinctive cock-a-doodle-doo is piercing: if you happen to be standing near a rooster sounding off, you’re hit with a sound wave that’s about 100 decibels. That’s unpleasantly loud, like the whir of chainsaw. If one cock-a-doodled right in your ear, the sound is even louder—over 140 decibels. Sounds that loud can cause damage in less than a second, and are just shy of shattering your eardrum.

In fact, roosters are so loud that it’s surprising they aren’t deaf from their own calls. So Belgian researchers looked into it, and found that they have special ears which allow them to crow to their hearts’ content without losing their hearing.

Loud sounds (above 120 decibels) can cause permanent hearing losses because the intense air pressure waves can damage and even kill the cells that translate sounds into neurological signals. At more than 130 decibels, it takes less than a second to inflict lasting damage. So you’d think that roosters crowing every day would slowly squawk themselves to total deafness. Since they don’t, scientists figured they must have some way of protecting their ears when they crow.

So researchers from the University of Antwerp and the University of Ghent in Belgium studied the ears of hens and roosters. They strapped microphones to three rooster heads, placing the business ends right at the animals’ ear openings, to measure the sound levels the animals experience when they crow. They also measured the crowing from different distances away. They then made micro-CT scans of hen and rooster ears to reconstruct the geometry of their ear canals when their beaks are open and closed.

The rooster crows they measured were more than loud enough to be potentially damaging—often over 100 decibels, and one animal in particular crowed at over 140 decibels. When the researchers looked at their ears, they saw how the animals are able to be so loud without going deaf: their ears are blocked when they crow. When the animals opened their beaks fully, their external auditory canals completely closed off. So basically, roosters have built in earplugs.

Interestingly, this only happened in the roosters—in hens, the canals shut somewhat, but don’t close completely because of slight differences in the morphology of their ears. And that weirdly makes sense, since they don’t need the sound damper to prevent damage. Hen calls are much quieter (~70 decibels), and even the loudest rooster call was only 100 decibels at a distance of 50 centimeters. Unless roosters are crowing right in their hens’ ears, there’s no chicken-produced noise that’s loud enough to cause hens permanent damage.

That suggests that as roosters got louder and louder—to more definitively tell other roosters to stay away from their hens—the shape of their ears slowly changed, too. And that makes sense from an evolutionary perspective. If loudness made a rooster more fit, then it follows the most successful reproducers would be individuals with slight ear modifications that allowed them to be louder without going deaf.

So the next time a rooster rudely awakens you from a peaceful slumber, remember that his poor hens have no such built-in ear protection. Without those anatomical earplugs, they are forced to listen to those crows at full volume. And you might want to be thankful that you have the choice of blocking out his annoying screeching with a pair of foam inserts.