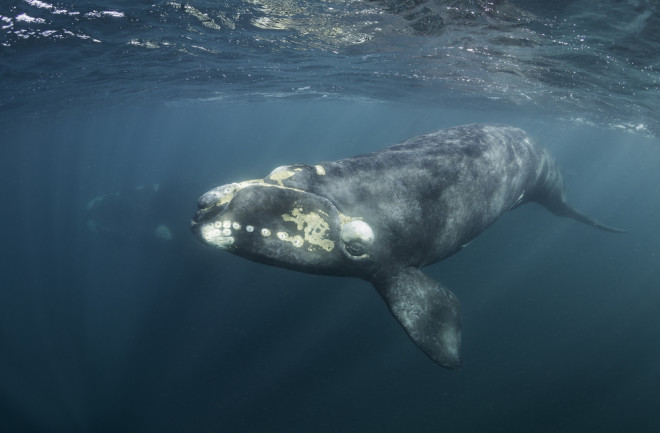 Right whales were hunted to extinction in the Mediterranean. New evidence indicates even the Romans may have hunted whales on a commercial scale. (Credit: wildestanimal/shutterstock) In the second century, the Greco-Roman writer Oppian described men in rowboats thrusting harpoons into a “sea monster,” which is then roped and towed to shore. At the time, the Romans had a successful fishing industry in the Strait of Gibraltar, the western waterway to the Mediterranean world. Historians sometimes say Roman fishing at this bottleneck included whaling, but other than Oppian’s poem and other indirect clues, there was no evidence. A paper published Wednesday in The Royal Society Journal suggests coastal whales lived in great numbers in the strait during Roman times. The authors speculate that a commercial whaling operation may have existed. Though other cultures harvested whales before Roman times (whaling goes back 5,000 years), none of them turned it into an industry. The Basques of the 11th century are credited with creating the first large-scale whaling business. If the Romans were whaling commercially, it would predate the Basques’ by 1,000 years.

European researchers led by Ana Rodrigues, of the Center for Functional and Evolutionary Ecology in France, applied DNA and collagen analyses to whale bone fragments that were discovered along the strait. Six of the fragments were from right whales (Eubalaena glacialis) and gray whales (Eschrichtius robustus) that lived during the middle and late periods of the Roman Empire, from about 200 to 450 AD. The dates are within a period when Rome operated more than 200 fish processing plants along the coasts of the Strait of Gibraltar. With this infrastructure already in place, it’s feasible that the Romans also used it to salt whale meat and blubber, the paper says. There's also evidence of a marine trading network across the Roman Empire, which could have accommodated whale products. Adding to the circumstantial evidence of Roman whaling is that right and gray whales have been relatively easy prey of humans for millennia. That’s because the animals migrate and calve close to shore, so their breaches are easily seen by hunters on land. “Their coastal habits mean that they were among the earliest species to be targeted [by humans] using quite simple technology,” Rodrigues says. During Roman times, both species likely used the Mediterranean for calving, which not only happens close to shore but also at a predictable time – ideal circumstances for whalers. None of this demonstrates that a Roman whaling industry existed, says Rodriguez. But it does show that the Romans had the means, the motive and opportunity to harvest gray and right whales at an industrial level.

Whaling wiped out populations relatively quickly partly because hunts were often during calving season, when cows are less mobile and close to shore. A disproportionate number of fertile females were harvested. If Romans were whaling at an industrial level, whale populations in the region would be dramatically depleted within centuries. This might explain why ancient DNA analysis shows that Atlantic gray whales were already in decline before the ramping up of Basque whaling in the eastern North Atlantic centuries later, according to the paper. Both species were nearly wiped out in the Mediterranean by the sixth century. Today the whale species are close to extinction. Only about 450 right whales exist in the eastern North Atlantic, and this year during calving season (between December and March), no calves were born. The gray whale is currently found only in the North Pacific. “The fact that in a region as well studied as the Mediterranean we could forget about the existence of two very large and conspicuous species of coastal whales – and perhaps even forget we used to hunt them – shows how prone we humans are at forgetting, and thus underestimating, our impact on ecosystems,” Rodrigues says.