Rock-Solid Science: A 6-Mile-Wide Space Rock Did Wipe Out the Dinosaurs, Experts Say 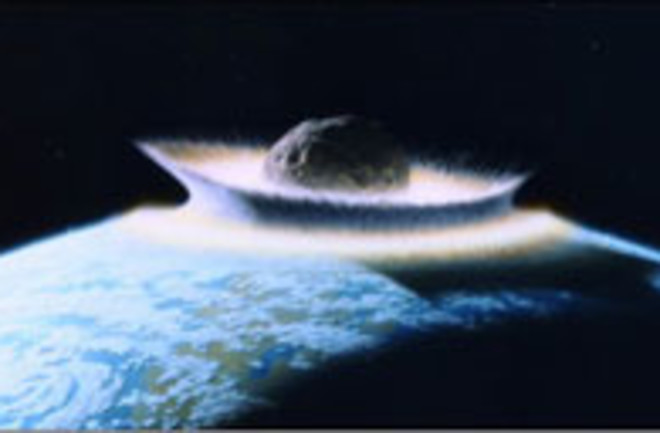 Will we ever get a solid answer on what killed the dinosaurs? According to a new "K-T Boundary Dream Team" comprising of 41 international experts, including geophysicists and paleontologists, yes, the question has been settled: An asteroid is indeed to blame. For years, scientists have argued over different theories of what killed the dinos--including one hypothesis that has gained ground recently, which suggests that massive volcanic activity in India's Deccan Traps wiped them out 65 million years ago. However, the latest expert panel stuck to the asteroid theory, saying a massive impact wiped out the dinos and more than half of the Earth's other species. The panel's review was published in the journal Science. After studying all the available data on the Cretaceous-Tertiary (K-T) mass extinction, the panel concluded that the catastrophic event was caused by a 6-mile-wide asteroid that struck

Earth at an angle of 90 degrees and a speed of about 12.4 miles per second – about 20 times faster than a speeding bullet [Guardian]. The asteroid hit Chicxulub, Mexico,

with a force one billion times more powerful than the atomic bomb at Hiroshima [Science Daily News].

The impact of the crash would have triggered large scale fires, landslides, earthquakes that measured 10 on the Richter scale, and subsequent tsunamis, scientists said. Debris loosened by the impact would have shrouded the planet, clouding the skies, causing a global darkness, and "killing off many species that couldn't adapt to this hellish environment"

according to study coauthor Joanna Morgan.

The scientists noted that the asteroid put an end to dinosaurs, the bird-like pterosaurs, and large marine reptiles, but it also marked a new beginning. Said study coauthor Gareth Collins:

"Ironically, while this hellish day signalled the end of the 160 million year reign of the dinosaurs, it turned out to be a great day for mammals, who had lived in the shadow of the dinosaurs prior to this event. The KT extinction was a pivotal moment in Earth's history, which ultimately paved the way for humans to become the dominant species on Earth"

The asteroid theory is far from new. The idea was first proposed by the father-son duo of Luis and Walter Alvarez three decades ago, when they found high levels of iridium in geological samples around the world. The element iridium is rare in the Earth's crust but is common in asteroids, and can be found at asteroid impact sites.

The current panel analyzed soil samples to find that immediately after the iridium layer, there is a dramatic decline in fossil abundance and species, indicating that the KT extinction followed very soon after the asteroid hit

The team also based their conclusions on "shocked" quartz. Quartz is shocked when it is hit very quickly by a huge force; shocked quartz is found only at asteroid impact locations and nuclear explosion sites. The abundance of shocked quartz in the rock layers associated with the KT boundary add further weight to the asteroid impact theory, the team declared. Study coauthor Kirk Johnson says the team discarded the theory that large-scale volcanism made the dinosaurs extinct because the eruptions at the Deccan traps site

started at least 400,000 years before the Chicxulub impact with no effect on life. The team traces the extinctions to within plus-or-minus 10,000 years of the impact 65.5 million years ago. "So we are back to where we started with the Alvarez hypothesis, a single, large, (6-mile-wide) impact," Johnson says [USA Today].

Related Content:80beats: Forget “The Asteroid”: Could Supervolcanoes Have Killed the Dinosaurs? 80beats: In the Permian Period, Erupting Super-Volcanoes May Have Killed Half the Planet 80beats: Dinosaurs Ruled the World Because They “Got Lucky,” Say Scientists DISCOVER: Did an Asteroid Really Dust the Dinosaurs? DISCOVER: When North America Burned explains how the asteroid could have set our continent on fire