Robots evolve to deceive one another

In a Swiss laboratory, a group of ten robots is competing for food. Prowling around a small arena, the machines are part of an innovative study looking at the evolution of communication, from engineers Sara Mitri and Dario Floreano and evolutionary biologist Laurent Keller.

They programmed robots with the task of finding a "food source" indicated by a light-coloured ring at one end of the arena, which they could "see" at close range with downward-facing sensors. The other end of the arena, labelled with a darker ring was "poisoned". The bots get points based on how much time they spend near food or poison, which indicates how successful they are at their artificial lives.

They can also talk to one another. Each can produce a blue light that others can detect with cameras and that can give away the position of the food because of the flashing robots congregating nearby. In short, the blue light carries information, and after a few generations, the robots quickly evolved the ability to conceal that information and deceive one another. 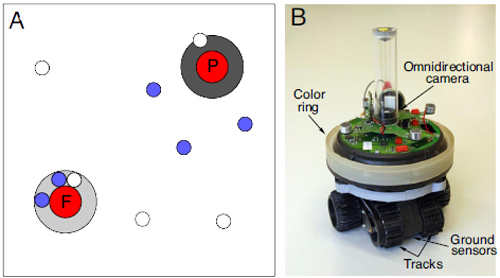 Their evolution was made possible because each one was powered by an artificial neural network controlled by a binary "genome". The network consisted of 11 neurons that were connected to the robot's sensors and 3 that controlled its two tracks and its blue light. The neurons were linked via 33 connections - synpases - and the strength of these connections was each controlled by a single 8-bit gene. In total, each robot's 264-bit genome determines how it reacts to information gleaned from its senses.

In the experiment, each round consisted of 100 groups of 10 robots, each competing for food in a separate arena. The 200 robots with the highest scores - the fittest of the population - "survived" to the next round. Their 33 genes were randomly mutated (with a 1 in 100 chance that any bit with change) and the robots were "mated" with each other to shuffle their genomes. The result was a new generation of robots, whose behaviour was inherited from the most successful representatives of the previous cohort.

In their initial experiments, the robots produced blue light at random. Even so, as the robots became better at finding food, the light became more and more informative and the bots became increasingly drawn to it after just 9 generations.

But as it is for real animals, it's not always in the robots' best interests to communicate the location of food. The red ring only has space for 8 robots, so not if every bot turned up, they had to physically shove each other for feeding rights. The effects of this competition became clear when Mitri, Floreano and Keller allowed the emission of blue light to evolve along with the rest of the robots' behaviour.

As before, they shone randomly at first and as they started to crowd round the food, their lights increasingly gave away its presence. And with that, the robots became more secretive. By the 50th generation, they became much less likely to shine near the food than elsewhere in the arena, and the light became a much poorer source of information that was much less attractive to the robots

Nonetheless, the light never became completely useless. As the bots became more savvy in their illuminations and relied less and less on the lights, individuals that actually did shine near food pay a far shallower price for it. Because of that, the evolutionary pressure to keep others in the dark was lower and the information provided by the lights was never truly suppressed.

This also meant that the robots were incredibly varied in their behaviour. With the yoke of natural selection relaxed, processes like genetic drift - where genes pick up changes randomly - were free to produce more genetic diversity and more varied behaviour. After around 500 generations of evolution, around 60% of the robots never emitted light near food, but around 10% of them did so most of the time. Some robots were slightly attracted to the blue light, but a third were strongly drawn to it and another third were actually repulsed.

Mitri, Floreano and Keller think that similar processes are at work in nature. When animals move, forage or generally go about their lives, they provide inadvertent cues that can signal information to other individuals. If that creates a conflict of interest, natural selection will favour individuals that can suppress or tweak that information, be it through stealth, camouflage, jamming or flat-out lies. As in the robot experiment, these processes could help to explain the huge variety of deceptive strategies in the natural world.