Robins start with a magnetic compass in both eyes, and end up with just one 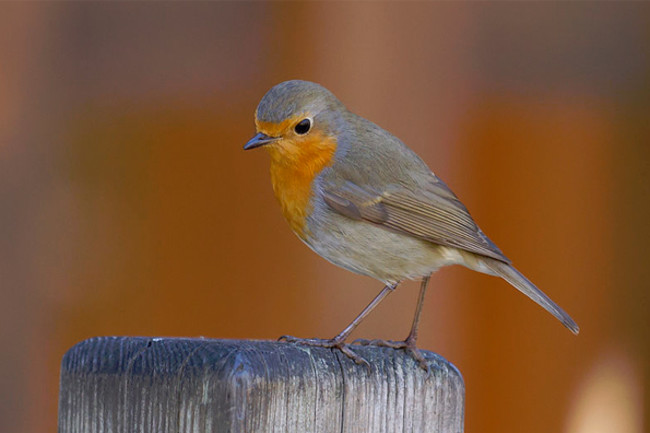 Here’s an amazing fact: Adult robins have a magnetic compass in their right eye that allows them to sense the direction of the Earth’s magnetic field, and navigate when all other landmarks are obscured. Here’s an even more amazing fact: Baby robins have two such compasses, one in each eye. They lose the left one as they grow up. Robins kick-started the study of magnetic senses in the first place. In the 1950s, a German biologist called Hans Fromme showed that robins would always try to escape from a cage in the same direction when it came time to migrate. Even though they had no visual bearings, they headed south-west, as if sunny Spain lay just beyond their cages. In 1966, the husband and wife team of Wolfgang and Roswitha Wiltschko showed that a powerful magnet could disrupt this constant vector, sending them skittering in all sorts of directions. The Wiltschkos have been studying the magnetic sense of robins ever since. In the 1980s and 1990s, they showed that their compass depends on light. They need some of it, and blue-green wavelengths in particular, to find their way. And in 2002, they showed that the compass lies in just one eye – the right one. If they wore a one-sided goggle that blocked their left eye, they could navigate just fine within their featureless cages. If their right eye was blocked, they headed in random directions. It’s not just robins. They right-eye compasses that the Wiltschkos discovered also exist in Australian silvereyes, homing pigeons and domestic chickens. The story seemed pretty straightforward, but Henrik Mouritsen threw a spanner in the works. In 2010, he showed that garden warblers have compasses in both eyes. A year later, he found that the same was true for both robins and silvereyes. Now, the Wiltschkos have returned with an answer to Mouritsen’s contradictory results. By studying the same robins over multiple years, they have shown that these birds begin with compasses in both eyes, before settling on just one. Together with Dennis Gehring, they caught young robins in September 2010 in Frankfurt’s Botanical Gardens. These birds had flown in from somewhere in Scandinavia and had never finished the full migration to the Mediterranean. The team tested the birds in the usual way: put an aluminium cap to cover one or both eyes, place them in funnel-shaped cages lined with paper, and see where they hop towards as shown by the scratch marks made by their feet. In the autumn, when they were first caught, the young birds could navigate with both eyes. But by the following spring, the ability had become lateralised to the right one, and they couldn’t rely on their left eye alone. There’s still some flexibility, though. If the team covered the robins’ right eyes for 6 hours before testing them, they could navigate with just their left eyes. In the spring of 2011, the team captured more young robins on their way back from their winter breeding grounds. They tested these more experienced birds in the autumn, and found that their compasses had not only lateralised, but had done so permanently. Covering their right eye no longer opened up the use of the left-eye compass. These elegant experiments help to explain the conflicting results from Mouritsen’s lab, because he tested all his birds in the autumn while the Wiltschkos had done all their experiments in the spring. During those precious six months, an ability that was once found in both eyes had become the province of just one. This happens gradually. There’s an intermediate phase when the growing bias of the right eye can be reversed by covering it, unlocking the left eye’s fading potential. This suggests that the eyes themselves aren’t changing. Rather, the brain is processing the information from them in different ways. Although bird brains have several skills that are largely governed by one half of the brain, this is the first known example of such a bias maturing over time. There are some parallels in humans: Our preferred hand only becomes stably dominant past the ages of three or four. A final question remains: why use just one compass when you originally have two? As Mouritsen pointed out in his 2011 paper, a bird with just one magnetic compass would be more easily affected by eye damage or infections. That may be true, but in everyday use, the Wiltschkos note that two compasses aren’t any more useful than one compass. Unlike our eyes and ears, where the brain meaningfully combines information from both organs, the eye compasses provide redundant information. As they write: “The right eye superiority of the magnetic compass could free the capacity of circuits reached by the other eye and could thus increase neural efficiency during tasks that demand the simultaneous but different use of both hemispheres.” Update: Mouritsen, however, is not convinced by the Wiltschko's explanations. "When we test adult birds they are still able to do it with both the left and right eye.," he says. "We have a new paper on this coming out very soon in PLoS ONE." Reference: Gehring, Wiltschko, Gunturkun, Denzau & Wiltschko. 2012. Development of lateralization of the magnetic compass in a migratory bird. http://dx.doi.org/10.1098/rspb.2012.1654Image by Pierre SelimMore on magnetic senses: