Robins can literally see magnetic fields, but only if their vision is sharp 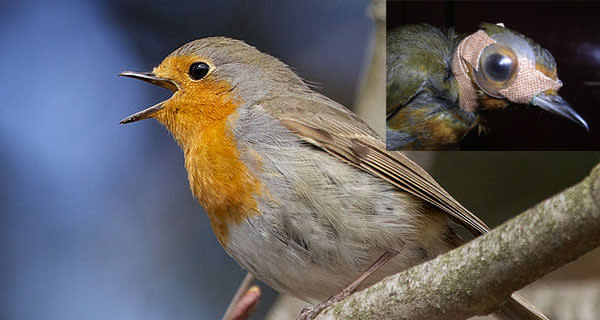 Some birds can sense the Earth’s magnetic field and orientate themselves with the ease of a compass needle. This ability is a massive boon for migrating birds, keeping frequent flyers on the straight and narrow. But this incredible sense is closely tied to a more mundane one – vision. Thanks to special molecules in their retinas, birds like the European robins can literally see magnetic fields. The fields appear as patterns of light and shade, or even colour, superimposed onto what they normally see. Katrin Stapput from Goethe University has shown that this ‘magnetoreception’ ability depends on a clear image from the right eye. If the eye is covered by a translucent frosted goggle, the birds become disorientated; if the left eye is covered, they can navigate just fine. So the robin’s vision acts as a gate for its magnetic sense. Darkness (or even murkiness) keeps the gate shut, but light opens it, allowing the internal compass to work. The magnetic sense of birds was first discovered in robins in 1968, and its details have been teased out ever since. Years of careful research have told us that the ability depends on light and particularly on the right eye and the left half of the brain. The details still aren’t quite clear but, for now, the most likely explanation involves a molecule called cryptochrome. Cryptochrome is found in the light-sensitive cells of a bird’s retina and scientists think that it affects just how sensitive those cells are. When cryptochrome is struck by blue light, it shifts into an active state where it has an unpaired electron – these particles normally waltz in pairs but here, they dance solo. The same thing happens in a companion molecule called FAD. Together, cryptochrome and FAD, both with unpaired electrons, are known as a “radical pair”. Magnetic fields act upon the unpaired electrons and govern how long it takes for the radical pair to revert back to their normal, inactive state. And because cryptochrome affects the sensitivity of a bird’s retina, so do magnetic fields. The upshot is that magnetic fields put up a filter of light or dark patches over what a bird normally sees. These patches change as the bird turns and tilts its head, providing it with a visual compass made out of contrasting shades. 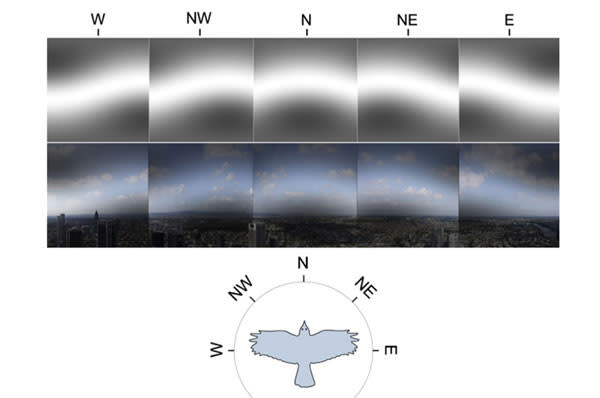 To test the bounds of this ability, Stapput wanted to see what would happen if she blurred a robin’s vision. She outfitted her robins with somewhat unflattering goggles, with clear foil on one side and frosted foil on the other. Both allowed 70% of light to get through, but the frosted foil disrupted the clarity of the image. The robins were kept in cages until they were ready to migrate and let loose in funnel-shaped cages lined with correction fluid. As they orientated themselves and changed course, they created scratches on the cage walls which told Stapput which direction they were heading in. These scratches revealed that with both eyes open, the robins flew straight north as they would normally do in the wild. If their left field of vision was frosted, they went the same way. But if their right eye was covered, they became disorientated, heading in completely random directions. This experiment shows that the internal compass doesn’t just depend on light – birds also need to see a clear image with their right eye in order to find they way. After all, their magnetic sense only provides them with information that lies on top of the images they normally see. If that image is blurry, the magnetic sense is useless. To put it another way, driving with an excellent Satnav won’t do you much good if your windscreen is covered in frost. But Stapput thinks that birds also need a sharp, focused image to separate the information from their visual and magnetic senses. Since both lie on top of each other, and both involve differences in light and shade, the potential for confusion is high. But thanks to lines and edges, the images that birds see tend to have sharp transitions between light and shade; by contrast, changes in magnetic fields are smooth and more gradual. So sharp changes in contrast are probably due to the boundaries of objects, but smoother changes are probably due to magnetic effects. Stapput’s study certainly provides good support for the “radical pair” explanation, but it doesn’t rule out an alternative hypothesis. Some birds, such as pigeons, have small crystals of magnetite in their beaks. This iron-rich magnetic mineral could provide further clues about the surrounding magnetic fields, especially in darkness. Reference: Current Biology http://dx.doi.org/10.1016/j.cub.2010.05.070Image from Ernst Vikne and Theoretical and Computational Physics Group More on magnetic senses: