We've all seen the images of receding glaciers and stranded polar bears that accompany talks of climate change. But rising carbon dioxide levels also have subtler and less familiar effects, and may prove to be a boon for many animal groups. Plant-eating insects, for example, have much to gain in a high -CO2 future as rising concentrations of the gas can compromise the defences of the plants they feed on. 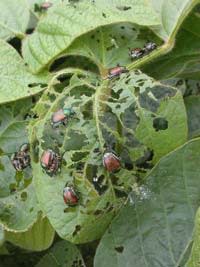 Plants and herbivorous insects are engaged in a silent war that we are rarely privy too, where chemicals act as both weapons and messengers. Munching mandibles trigger the production of signalling molecules like jasmonic acid that announce the presence of invaders to other plants of the plant, neighbouring individuals, or even parasitic wasps, which attack the pests and turn them into living larders for wasp eggs.

The battle isn't over even after parts of the plant are eaten. Beetles, for example, rely on enzymes called cysteine proteinases to digest the plant proteins they swallow, and free up valuable amino acids for the insects' own growth. But when plants detect jasmonic acid signals, they produce chemicals called "cysteine proteinase inhibitors" (CystPIs) that block the insects' digestive enzymes and prevent them from fully digesting their meals.

But these defences may buckle as carbon dioxide levels rise. Jorge Zavala and colleagues at the University of Illinois found that increasing levels of CO2 reduce the ability of soybeans to use jasmonate signals. That shrinks their stockpiles of defensive CystPIs and makes them more vulnerable to hungry pests including two voracious species of beetle - the western corn rootworm (Diabrotica virgifera) and the Japanese beetle (Popillia japonica). Given that soybeans are an increasingly important food crop, it's in our interest to stop insects from eating them so that we can instead.

Zavala's research forms part of the innovative SoyFACE (Free Air Concentration Enrichment) experiment. Here, where soybeans are grown under realistic field conditions but can be fumigated with levels of carbon dioxide that match those predicted for the future. For the moment, these levels are sitting at 380 parts per million, an already considerable increase from the 280 ppm experienced at the start of the Industrial Revolution. If our emissions proceed unabated, the atmosphere of 2050 will pack a staggering 550 ppm of CO2.

Previously, Zavala found that soybean allotments grown at these concentrations attract larger numbers of these plant-predators, which then lived longer and produced more eggs. The soybeans used the added carbon dioxide to produce more sugars but Zavala found that this extra nutritional content couldn't completely account for the influx of ravenous insects.

He solved the mystery by analysing the levels of five genes in the leaves of plants grown at normal or raised CO2 conditions. Three of these - acc, lox7 and lox8 - are used to produce defensive signalling molecules. When attacked by Japanese beetles, the plants grown in CO2-rich air failed to induce these three genes to the same extent as plants grown under normal conditions. In contrast, the soybeans' exposure to carbon dioxide didn't affect their use of two control genes unrelated to defence, regardless of the presence of the beetles.

Deprived of their usual rush of signalling molecules, the high-CO2 plants were more poorly defended than their ambient-CO2 peers. Their meagre baseline stocks of CystPIs were about half the size and when beetles invaded, they managed to marshal about 40% less reinforcements. 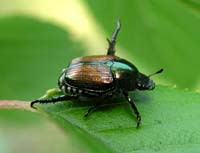 Because of this lax security, the beetles were able to digest more of what they ate. Zavala found that the activity of digestive proteinases in the guts of corn rootworms and Japanese beetles was about 40% higher if the pests were fed on soybeans grown in high CO2 levels.

Zavala freely admits that it's not clear if the other plants would be similarly affected, but he intends to find out. Nor is it clear if the soybeans' weakened defences would offset the increased growth that they enjoy at high levels of carbon dioxide. But their problems may not be limited to beetles.

Signalling molecules like jasmonic acid control other defences beside the production of CystPIs, as well as a whole variety of important processes within a plant. If rising carbon dioxide levels suppress the levels of these messenger molecules, they could render plants defenceless against a much wider range of herbivores, and worsen any potential losses.

Images by Evan Delucia and PiccoloNamek.