Review: The Immortal Life of Henrietta Lacks by Rebecca Skloot 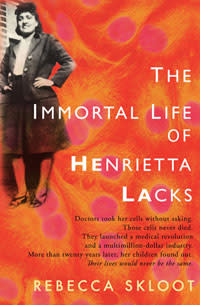 Look in any biomedical laboratory, and you will find HeLa cells. Over 50 million tonnes of these cells have been grown in churning vats of liquid all over the world. They have been one of the most important tools in modern medicine, pushing forward our understanding of cancer and other diseases, and underpinning the polio vaccine, IVF, cloning, and more. None of these advanced would have been feasible without HeLa. Most scientists have used or seen them but most have no idea about their origin. It's time to find out.

In early 1951, there was only one place in the world where HeLa cells could be found - the cervix of a poor, black tobacco farmer called Henrietta Lacks. She was treated for cervical cancer at Johns Hopkins Hospital where, without her knowledge or consent, doctors took some cells from her tumour and cultured them. They became HeLa - the immortal line of cells that would change the world. Henrietta died in the same year. Her family only learned of her "immortality" more than 20 years later, when scientists started using them in research, again without informed consent, to better understand Henrietta's cells. The cells launched a multimillion-dollar industry that sells human biological materials but her family cannot afford health insurance.

The remarkably story of Henrietta's life, cells and family are now coming to light, narrated in an equally remarkable book - Rebecca Skloot's The Immortal Life of Henrietta Lacks. Skloot is a veteran science journalist and first-time author and her debut is thrilling and original non-fiction that refuses to be shoehorned into anything as trivial as a genre. It is equal parts popular science, historical biography and detective novel. It reads as evocatively as any work of fiction, with dialogue, characters and settings vividly reconstructed from archived material, legal documents and thousands of hours of interviews. Like a mystery, the chronology flits back and forth from the first and last days of Henrietta's life, the decades of discovery that followed her death and Skloot's own modern-day quest to uncover the story.

Indeed, Skloot repeatedly appears as a character in her own book, narrating her journey from first hearing about HeLa cells in a classroom to her attempts to contact and support the Lacks family. This literary device could easily have come across as self-aggrandising but Skloot fully earns her status as the story's third protagonist. Her narration reveals the trials that the Lacks family have undergone since Henrietta's cells went global, and the sheer amount of trust it took to uncover the details of this story.

I did, indeed, say "third protagonist". This is really a book about three heroines - the two whose names grace the cover and Henrietta's daughter, Deborah Lacks. Skloot's personal mission to tell this story and Deborah's quest to know about her mother's life and legacy are central parts of Henrietta's story and they form some of the book's most compelling segments.

I write this review as someone who isn't typically a fan of historical non-fiction. Particularly in popular science, I often find descriptions of researchers to be distracting attempts at shoehorning in a human element that is out of keeping with the rest of the book. Not so here - this work has the most human of stories at its core, and never deviates from that important, and often heartbreaking, humanity. When science appears, it does so effortlessly, with explanations of cell anatomy or techniques like "fluorescence in situ hybridization" seamlessly worked into descriptions of the coloured wards of Johns Hopkins hospital to Lacks's hometown of Clover, Virginia.

Skloot's prose is witty, lyrical, economical and authoritative. But The Immortal Life of Henrietta Lacks is not a comfortable read. I visibly winced at descriptions of Henrietta's blackened, burned skin after multiple rounds of devastating radiation treatments. I put the book down with a heavy sigh after reading about the experiments that black Americans have been unwittingly subjected to over the years. I cried twice, at events that I can't talk about without seriously spoiling the book. But it is uplifting too, particularly in a stand-out chapter where Henrietta's children, Deborah and Zakariyya, visit a cancer researcher to see their mother's cells under a microscope.

All of this is to be expected of a book that refuses to shy away from tackling important themes - the interplay between science and ethics, the question of who owns our bodies, and the history of racism in the US. And yet for all its grand scope, skilful writing and touching compassion, there is one simple element that makes The Immortal Life of Henrietta Lacks an instant classic - this is one of those stories that genuinely needed to be told.

Uncovering it was a decade-long labour of love for Skloot and every year of research is apparent in its brisk 300-page length. It's a tribute to the art of investigative journalism and it sets an incredibly high benchmark for future non-fiction writing. As a young science writer starting out in this field, this book will provide inspiration for years to come.

As a final thought, I was struck by the parallels between Henrietta's cells and her story. Henrietta's entire family history was eventually condensed into a small sliver of cells that you could carry in a glass vial. They have achieved immortality, used by scientists throughout the world. Similarly, her entire life has been condensed into a moving tale and an exceptional book that you could read in a comfortable day. By right, it will achieve the same immortal status.

The Immortal Life of Henrietta Lacks launches on February 2, 2010 and is currently available to pre-order on Amazon (UK or US site). I urge you to do so - pre-ordering will help to determine the book's fate in the first few weeks of sale, when much of its future is set.