It's Saturday night and I'm spending it with hundreds of children watching a man eat the world's hottest chilli. The man breathes wide-mouthed, his eyes water, and he stands bent over with his hands on his knees. The children love it. The charismatic woman who forced the chilli onto the man assures everyone that he is unlikely to die...

This was just one of the many amusing scenes at this year's Royal Institution Christmas Lecture, which also saw the lecture theatre being invaded by the world's deadliest poison, two hungry ponies, a hand grenade and a selection of incredible plants. For those not in the know, the Christmas Lectures take place at the Royal Institution and are, well, a bit of an institution. Started by Michael Faraday, they've been an annual fixture since 1825, missing only four years because of a pesky war.

This year's lecturer was Sue Hartley from the University of Sussex, who has spent her career studying the complex relationships between plants and the creatures that eat them. Last night, Hartley told the story of the 300-million year war between plants and herbivores and the various tricks that plants have used to give themselves the edge.

Like all the Christmas lectures, the talk is specifically targeted at kids and it does its job peerlessly. There is something utterly uplifting about seeing a group of kids running, nay, fighting their way up a set of stairs to get to a science lecture.It's just unheard of. Once everyone was seated, it was clear that the entire ground floor of the legendary Faraday theatre was entirely full of kids. The entire event is geared to them and they get the best views - their parents and other grown-ups were relegated to the far less comfortable balcony seats.

And they love it, these rows of assembled nerdlings, these geeks-in-the-making. It's not every day that they're specifically asked to make as much noise as possible at designated times and they take to it with aplomb, bursting into rapturous cheers when indicated. And then, as the lecture progresses, it's clear they need no signal. So well-judged is Hartley's talk that they lap up every word with rapt attention. When she asks for volunteers, the kids go mental.

Some helped to introduce the idea that plants store poisons by stabbing a plastic sac of orange liquid, which turned blue as it mingles with the water surrounding it. Others demonstrated the toll that grass exerts on the teeth of herbivores by rubbing large model teeth against strips with varying degrees of silicon. 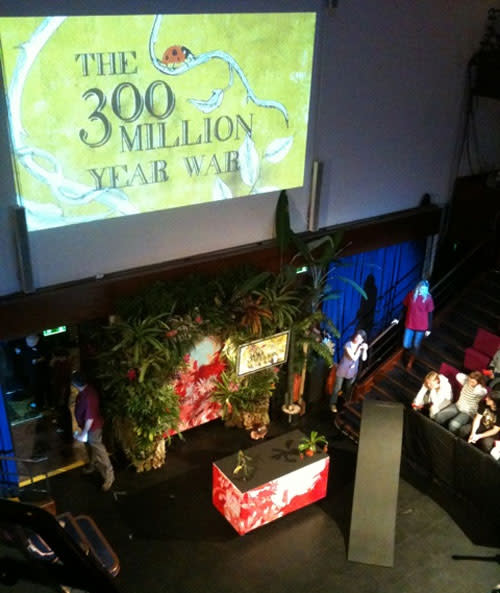 Such props are all part and parcel of the talk and a lot of work goes into them. Even before a word is spoken, the theatre has been adorned like a movie stage. Plants frame the wall behind the speaker, and a ramp sitting in the middle of the floor that would soon be transformed into a giant holly leaf. Throughout the talk, stagehands busied themselves in the background, wheeling in cycads, experiments, and boxes draped in biohazard logos. At one point, Hartley illustrated the idea that some plant poisons are kept in inactive states by pulling the pin out of a (fortunately dead) hand grenade. It was a far cry from slides, bullet points and laser pointers.

Throughout her talk, Hartley instilled a fresh respect for plants, painting even the most familiar of species in a new and formidable light. The Christmas tree is armed with tough, prickly needles (and she hands out cutting to the kids to prove it). Holly leaves have a waxy surface too slippery for most insects, as an assistant in a caterpillar costume demonstrates by flailing about on a giant model. The potato becomes a terrifying foe when a microscope reveals the sticky hairs and poison-releasing trichomes on its leaves. Grasses are 6% silicon, and they channel the element into defences called phytoliths, shaped like spikes and razor-blades.

Hartley told her audience that plants are experts in chemical weapons too. Nettles use hairs like hypodermic needles to inject histamine, a chemical involved in allergic reactions, and acetylcholine, a messenger chemical used by our brain. Neither is useful to the plant, which has no allergic response and no nervous system - the nettle only uses these chemicals "to make your life a misery". A Japanese nettle can increase the numbers of its stings by 600 times when threatened, and a New Zealand species is s strong enough to kill a horse or a human.

The power of these chemical weapons was ably demonstrated by Adam, a game grown-up volunteer who ate a Dorset naga - the so-called ghost chilli. Chilli heat is measured in Scoville heat units. While a simple jalapeno pepper has a few thousand units, the Dorset naga has around a million. It's the "nuclear missile of the chilli world" and Adam bravely chomps an entire one to the delight of the watching children.

Hartley then introduces far nastier plant chemicals: cyanide from the bird's foot trefoil (she chomps a leaf to little effect); strychnine from the strychnine tree; and the deadliest one of all - ricin, form the castor bean. No one tries this. Holding up a jar of the beans, she tells the silent audience that these contain the most poisonous substance on the planet. Pointing to one of the children, she says that a block of ricin that size could kill a billion people. If there's a single reason to respect plants, it's this.

The talk was beautifully delivered, wonderfully interactive and incredibly informative, even for a professional science writer. Londoners can watch the others either on the live feed channelled to an adjacent room at the Royal Institution, or on More Four from the 21^st to the 25^th of December. There's also a live webchat with Sue on the RIGB website after each talk. You'll love it - I certainly did. The talks are a great demonstration that science can capture the minds of both children and adults, if it's delivered with skill, passion and clarity.