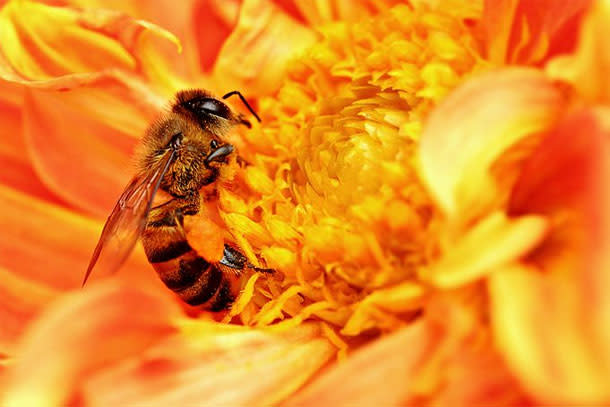 A different version of this story appears at The Scientist.

Honeybee workers spend their whole lives toiling for their hives, never ascending to the royal status of queens. But they can change careers. At first, they’re nurses, which stay in the hive and tend to their larval sisters. Later on, they transform into foragers, which venture into the outside world in search of flowers and food.

This isn’t just a case of flipping between tasks. Nurses and foragers are very distinct sub-castes that differ in their bodies, mental abilities, and behaviour – foragers, for example, are the ones that use the famous waggle dance. “[They’re] as different as being a scientist or journalist,” explains Gro Amdam

, who studies bee behaviour. “It’s really amazing that they can sculpt themselves into those two roles that require very specialist skills.” The transformation between nurse and forager is significant, but it’s also reversible. If nurses go missing, foragers can revert back to their former selves to fill the employment gap. 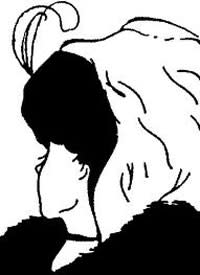 Amdam likens them to the classic optical illusion (shown on the right) which depicts both a young debutante and an old crone. “The bee genome is like this drawing,” she says. “It has both ladies in it. How is the genome able to make one of them stand out and then the other? The answer lies in ‘epigenetic’ changes that alter how some of the bees’ genes are used, without changing the underlying DNA. Amdam and her colleague Andrew Feinberg

found that the shift from nurse to forager involves a set of chemical marks, added to the DNA of few dozen genes. These marks, known as methyl groups, are like Post-It notes that dictate how a piece of text should be read, without altering the actual words. And if the foragers change back into nurses, the methylation marks also revert. Together, they form a toolkit for flexibility, a way of seeing both the crone and the debutante in the same picture, a way of eking out two very different and reversible skill-sets from the same genome. We have long known that epigenetic changes can separate a liver cell from a neuron, or even a queen bee from a worker. Other studies have found epigenetic changes that are related to changes in behaviour

. But as Gene Robinson

from the University of Illinois explains, Feinberg and Amdam “demonstrate for the first time that if the behaviour is reversible, so is the methylation.” “This is one of those papers that makes me envious,” said David Sweatt

, a neurobiologist from the University of Alabama at Birmingham, who was not involved in the study. “I feel it will be a foundational paper in the nascent field of behavioural epigenetics.” Amdam and Feinberg aren’t the first to study the differences between nurses and foragers. Aristotle himself was the first to recognise the differences, but he wrongly believed that nurses were the older sub-caste because of their grey fuzz. In fact, the nurses are the younger group, which only later mature into foragers. Brian Herb, a student in Feinberg’s lab, compared the brains of five foragers and five nurses, and found differences in the methylation levels of 155 genes. Next, Florian Wolschin, a postdoc in Amdam’s lab, removed all the nurses from the team’s hives while the foragers were away. “The foragers come back and go, Oh no, what happened? Half of them turn back into nurses,” says Feinberg. The team found that methylation levels in 107 genes changed during this reversal, 57 of which overlapped with the nurse-to-forager set. Seirian Sumner

from London’s Institute of Zoology points out that comparing two lots of five bees is “scraping the statistical barrel”, although the team did repeat their experiment with a fresh set of bees. Once again, they found methylation differences in 45 of the same 57 genes. What do the marksdo ? Around half of the genes that Feinberg and Amdam identified are inactivated by the methylation marks, while others are spliced differently—that is, the instructions they contain are cut up and reassembled in alternative ways. And what do these genes do? Most of them seem to be involved in controlling other genes. “Anybody would guess that they would be involved in smell or signalling,” says Feinberg. “That’s not what they are. They’re genes that are fundamentally important for regulating other genes.” Sumner says that a nice flow chart is emerging. Something triggers the transformation from nurse to forager. Methyl marks are added to a core set of genes, and dictate how they are activated or spliced. These genes then control the activity of yet other genes, leading to large shifts in the bee’s body and behaviour. “This pretty much describes a behavioural genomicist’s dream!” says Sumner. Biologists who study animal behaviour talk about “adaptive plasticity

” – the ability to change one’s body or behaviour in the face of a changing environment. “This paper is the first step in exposing the mechanisms [of that plasticity] and making them possible to study.” Robinson adds that we’re starting to learn how epigenetic changes affect many important parts of our lives. By showing a clear case of reversible epigenetics, this study provides tantalising hints that we might eventually be able to “manipulate epigenetics to improve cognition, aging, and other aspects of health and well-being.” But Sumner adds a word of caution: Bees can switch between nursing and foraging in a few hours, so the two roles may be very different but the transformation isn’t a huge one. In creatures that show more substantial changes in behaviour across their lives, would we expect to more complex changes in methylation. “At what point does behavioural reversibility become an irreversible unidirectional shift?” she asks. Reference: Herb, Wolschin, Hansen, Aryee, Langmead, Irizarry, Amdam & Feinberg. 2012. Reversible switching between epigenetic states in honeybee behavioral subcastes. Nature Neuroscience http://dx.doi.org/0.1038/nn.3218