Return of the supersoldier ants 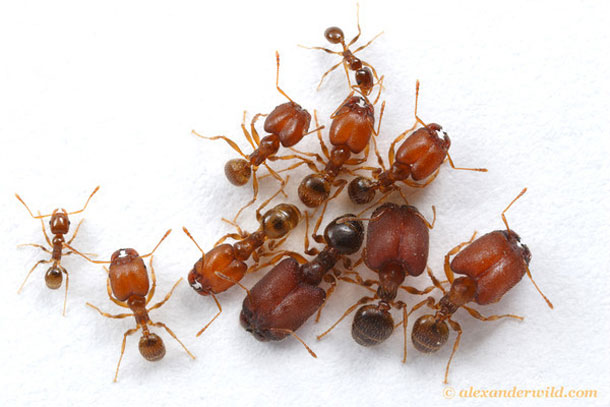 One massive group of ants has a secret supersoldier programme that’s been locked away for 35 to 60 million years. The

ants are an exceptionally diverse group with over 1,100 species. They’re also known as big-headed ants because their soldier caste has unusually large heads. Until now, we knew that a few of the Pheidole – just 8 out of 1,100 – can also produce supersoldiers, which are even larger than normal soldiers and have even more enormous heads. They use their outsized noggins to block their nest entrances against invading army ants. Now, Ehab Abouheif has found that the supersoldiers are the result of a genetic programme that runs throughout the entire Pheidole dynasty. It’s likely that every single species in the vast group has the hidden ability to make this special caste. In fact, Abouheif managed to induce supersoldiers among species that don’t usually recruit them, with just a dab of hormone. I wrote about this study for Nature, so head over there to read all the details. It’s a great evolutionary story. The eight species that regularly make supersoldiers are spread throughout the Pheidole family tree – some evolved in the group’s earliest days, and others are recent additions. If you looked at that, you’d probably think that the supersoldiers evolved independently. That’s only partly true. Here’s the more likely scenario, given Abouheif’s experiments. The ancestor of all the Pheidole could make supersoldiers, and some of the earliest species to evolve (like Pheidole rhea) kept this ability in its original form. Later, the supersoldier programme was suppressed for whatever reason. The ants stopped making this caste, but they never lost the potential too. The process that produces the supersoldiers is an exaggeration of the one that produces the normal soldiers. It involves the same hormone, so it may have been impossible for the ants to get rid of the supersoldier programme entirely, without losing soldiers completely. Later, this dormant potential was reactivated in a few select species, like Pheidole obtusospinosa, and the supersoldiers returned. One element that I didn’t have space for in the Nature piece is that these reactivated supersoldiers aren’t quite the same as the originals. Abouheif explains: “The ancestral potential has been locked in place for 35-60 million years, but when it comes back, it comes back really raw. The supersoldiers in P.obtusospinosa aren’t like the ones in P.rhea. There are differences in their behaviour and the way they’re used. It’s an interesting mix of retention and novelty. In the paper, we emphasise the sameness, but it’s actually a creative force too.” It also seems the dormant supersoldier programme spontaneously reactivates in Pheidole species from time to time. Indeed, that’s how this study started – Abouheif was studying a familiar species of ants (P.morrisi) when he suddenly found these monstrous soldiers that he had never seen before. From past experiments, we know that Pheidole sometimes produce supersoldiers if they are particularly well-nourished. “When these ancestral potentials are locked in place, there are mutations that release them at low frequencies. When natural selection needs them, it takes hold of it. Abouheif thinks that these evolutionary throwbacks, or “atavisms”, crop up all the time, and not just in ants. “They are everywhere,” he told me. “These things are totally unappreciated and been viewed slips in the developmental system that don’t go anywhere. They’ve been seen as the Barnum and Bailey of evolution – interesting oddities that don’t mean anything. They just indicate that there are ancestral genes. But I think they are a driving force in evolution. They are happening all the time, at rare frequencies.” In the case, Abouheif thinks that of atavisms were much easier to spot in Pheidole, not just because the supersoldiers are so physically different, but because ants care for each other. On their own, the supersoldiers might have been forgotten footnotes in evolutionary history. In a colony, they were cared for and, for some species, eventually became a permanent fixture. Abouheif sums it up nicely: “Ants are like humans in a way. We take care of the less fortunate in our society. As long as these anomalies can be fed, they’ll be taken care of. As long as they occur rarely enough that they have no cost to the efficiency of the colony, they’ll be taken care of. If we were studying a solitary organism, we’d miss this completely. It’s because it’s social that we’re given the chance to find these things. Ants are making what we would see in solitary organisms much more obvious to the researcher.“ Reference: Rajakumar, San Mauro, Dijkstra, Huang, Wheeler, Hiou-Tim, Khila, Cournoyea & Abouheif. 2011. Ancestral Developmental Potential Facilitates Parallel Evolution in Ants. Science http://dx.doi.org/10.1126/science.1211451Photo by the awesome Alexander Wild