Retention of memory through metamorphosis: can a moth remember what it learned as a caterpillar? 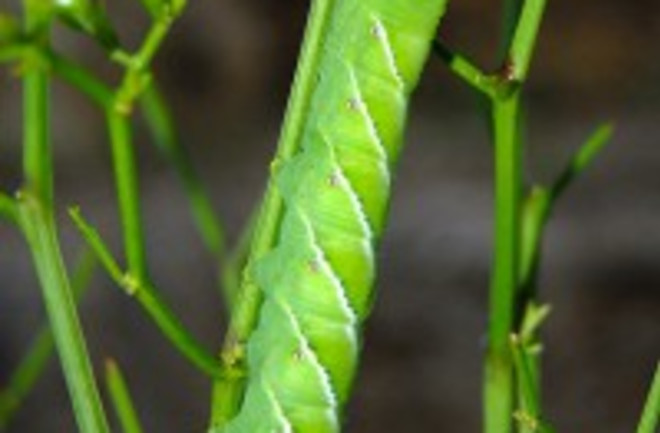 Photo: Flickr/Sam Fraser-SmithThe metamorphosis of caterpillars into moths or butterflies is a crazy thing. Not only do these animals acquire new body parts (Why, hello wings!), but other body parts undergo radical changes or disassemble altogether. In this study, scientists tested whether memories made by caterpillars are retained in adult moths despite all of these massive changes. To do this, they trained caterpillars of various "ages" (developmental stages called instars) to avoid specific odors, and then tested whether they remembered their lessons after turning into moths. Turns out that when trained late in caterpillar-hood, the adult moths retained the memories, but individuals trained while younger did not. This implies that there is some mental development that happens late in caterpillar development that is retained through metamorphosis. However, the structure or organization that is responsible for these retained memories remains a mystery.Retention of memory through metamorphosis: can a moth remember what it learned as a caterpillar? "Insects that undergo complete metamorphosis experience enormous changes in both morphology and lifestyle. The current study examines whether larval experience can persist through pupation into adulthood in Lepidoptera, and assesses two possible mechanisms that could underlie such behavior: exposure of emerging adults to chemicals from the larval environment, or associative learning transferred to adulthood via maintenance of intact synaptic connections. Fifth instar Manduca sexta caterpillars received an electrical shock associatively paired with a specific odor in order to create a conditioned odor aversion, and were assayed for learning in a Y choice apparatus as larvae and again as adult moths. We show that larvae learned to avoid the training odor, and that this aversion was still present in the adults. The adult aversion did not result from carryover of chemicals from the larval environment, as neither applying odorants to naïve pupae nor washing the pupae of trained caterpillars resulted in a change in behavior. In addition, we report that larvae trained at third instar still showed odor aversion after two molts, as fifth instars, but did not avoid the odor as adults, consistent with the idea that post-metamorphic recall involves regions of the brain that are not produced until later in larval development. The present study, the first to demonstrate conclusively that associative memory survives metamorphosis in Lepidoptera, provokes intriguing new questions about the organization and persistence of the central nervous system during metamorphosis. Our results have both ecological and evolutionary implications, as retention of memory through metamorphosis could influence host choice by polyphagous insects, shape habitat selection, and lead to eventual sympatric speciation." Related content: NCBI ROFL: Is that a subcutaneous larva or a hair? NCBI ROFL: Stinging in the oral cavity caused by ingestion of the sperm bags of a squid: a case report. NCBI ROFL: When late-night SciFi becomes reality.