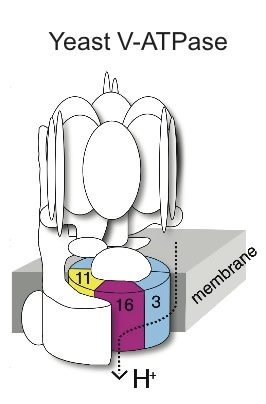 This is a story of about how the parts of a puzzle locked into place 800 million years ago. The puzzle is an ion pump that you can find in any mushroom, mold, or yeast. I've reproduced a picture of it here. Fungus cells, like our own cells, have lots of little pouches inside of them for carrying out special kinds of chemical reactions. In order for those reactions to work, there have to be a lot of positively-charged protons inside the pouches. To get those protons into the pouches, ion pumps like this one force them through membranes. This pump (which is is offically known as a vacuolar ATPase complex) is a wonderfully complex collection of proteins. They fit together elegantly, and they cooperate to get this vital job done. One particularly cool feature of this pump is the ring lodged in the pouch's membrane, where it spins around like a wheel. The ring is made up of six proteins--four copies of a protein called Vma3, and a single copy of two other proteins called Vma11 and Vma16--that lock together. If a mushroom can't make all three types of proteins, its pump won't work. And without a pump, it's a dead mushroom. Simple as that. Joe Thornton, a biologist at the University of Oregon, and his colleagues wondered how this pump came to be. Readers of the Loom may recall a couple previous posts I've written about Thornton's work. He traces the molecular history of life by resurrecting proteins from hundreds of millions of years ago and playing around with them to figure out how they work. This week in Nature, Thornton and his colleagues describe the history of the fungus ion pump. It's the first time they've reconstructed the history of such a molecular "machine" this way. It's also a useful lesson in the ways complex things evolve--especially things that seem so complex that it's hard to imagine how they could have evolved step by step from something simpler. The closest major group of species to fungi are animals. Like fungi, we have vacuolar ATPase complexes in our cells. But they're different. Instead of three types of proteins in the ring, we only have two types--five copies of Vma3, and one of Vma16. When it comes to ion pumps, at least, we are pretty primitive compared to mushrooms. The scientists compared the genes for these ring proteins to other genes in order to reconstruct their evoluationary history. They discovered that Vma11, the ring protein unique to the fungi, and Vma3 are closely related. At some point after the ancestors of fungi branched off from the ancestors of animals, an ancestral ring protein duplicated, forming the Vma3 and Vma11 proteins in fungi. Both of the proteins evolved a lot after the duplication. Thornton estimates that 25 amino acids changed between the ancestral protein and Vma3 in fungi, and 31 changed on the way to Vma11. By comparing Vma3 and Vma11 in yeast, Thornton and his colleagues were able to infer the structure of their ancestral protein. They then created that long-vanished protein (which they dupped Anc.3-11) and ran an experiment to see how it worked 800 million years ago. To run their experiment, the scientists first shut down the Vma3 and Vma11 genes in yeast cells. Normally, this would stop the yeast from growing. But then they inserted the Anc.3-11 gene into the yeast. The yeast build a two-protein ring instead of its normal three-protein ring, and did just fine with them. Thornton and his colleagues then created yeast strains with just Vma3 shut down. The yeast could combine Vma11 and Vma16 with Anc.3-11 to make a working ring. The same success occurred when they only shut down Vma11. 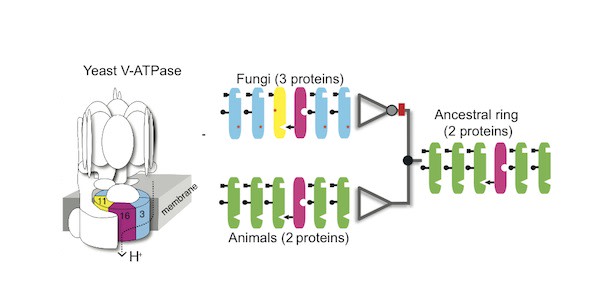 Based on experiments such as these, Thornton has developed a hypothesis to explain how the ring evolved. This picture illustrates the steps. The ancestral ring in the common ancestor of animals and fungi is shown on the right. It only has two types of proteins. Green is the ancestral form of Vma3 and 11, and red is the ancestral Vma16. The black squares, circles, and triangles represent parts of the proteins that can only lock onto certain parts of other proteins (represented by the matching recesses). As you can seen, the green protein (the ancestor of Vma3 and Vma11) is versatile, able to lock onto several different proteins. Animals have the same basic ring. In fungi, on the other hand, some important changes happened. First, Anc.3-11 duplicated. (Vma11 is shown in yellow.) Then the links between the proteins changed. None of the proteins gained any new functions, however. Instead, simple mutations caused them to lose an interface. The red dots on the blue and yellow fungal protein show where these interfaces disappeared. These mutations robbed the proteins of their former versatility. As a result, the ring now only fits together if all three types of proteins are present in one particular arrangement. You might think that life gets more complex as it evolves new features. Our eye can form sharp images, for example, but in order to do so, it first had to evolve a cavity, a pinhole opening, and a lens. In the case of this ring, however, Thornton has found just the opposite. Its simpler ancestor was made up of more versatile proteins. As the proteins duplicated and degenerated, their arrangement became more complicated. No one can say yet how often this kind of evolution happened. We'll have to wait for some more molecular time travel for an answer.