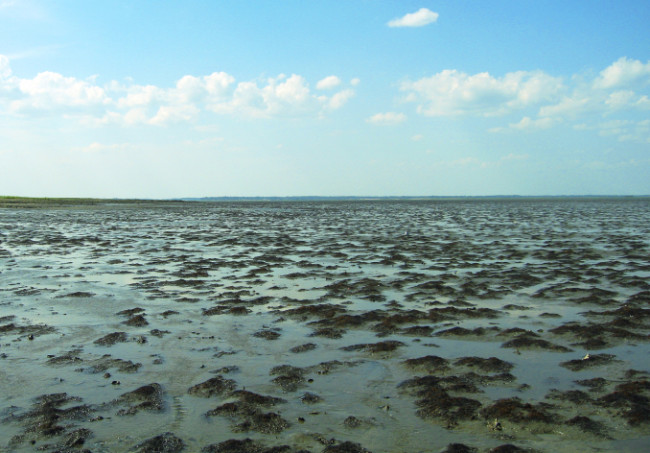 When a new developer comes to town and starts aggressively building up the empty property around your home, you can get mad—or you can move in. That's what tiny crustaceans in the Georgia mudflats have done. Facing an invasive Japanese seaweed, they've discovered that it makes excellent shelter, protecting them from all kinds of threats. And where the crustaceans went, a whole ecosystem has followed. Jeffrey Wright is an ecologist who studies invasive species at Australian Maritime College in Tasmania. He traveled all the way to the southeastern United States to study Gracilaria vermiculophylla, a Japanese seaweed that's made a name for itself by crashing both coasts of North America as well as northern Europe. Wright had previously studied a similar seaweed in Australia, and was eager to see how this ecosystem compared. In Georgia and South Carolina, Gracilaria has moved into marshy coastal areas, taking over the mudflats that appear at low tide near the mouths of rivers. Along with coauthors from the University of Georgia and the College of Charleston, Wright examined the Gracilaria that has invaded the end of the Wilmington River, near Savannah. Where these mudflats used to be empty of any plant life, they're now splotched all over with seaweed. There are shrimp, crabs, and gastropods living in the invasive plants. There are also lots of amphipods

—miniature crustaceans—called Gammarus mucronatus. They resemble shrimp somewhere between the size of a grain of couscous and a small pea. It was on these animals that the scientists focused their attention. First they performed an amphipod census. They found significantly more Gammarus living in the mudflats than in the nearby marshes. And they found up to 100 times more Gammarus on mudflats where the Japanese seaweed lived, compared to empty mudflats. What do the amphipods find so appealing about their new plant neighbor? One obvious possibility was that they like to eat it. The researchers tested this in several ways: they had Gammarus individuals choose between eating the seaweed and native grasses, they put the amphipods on seaweed alone and measured how much they ate, and they measured isotopes in wild amphipods to look for the chemical signature of Gracilaria.  However they asked the question, the researchers got the same answer: "The amphipods weren't eating the Gracilaria," Wright says. This came as a surprise. "It is this hugely abundant food source; these amphipods are herbivores but only just nibble it." The next possibility was that Gammarus uses the invasive plant for shelter. To test this, the researchers put the amphipods in petri dishes with or without seaweed and left them out on the mudflats in the sun. They also put amphipods in tubs with predatory shrimp or crabs, and came back later to see how many had survived. Now it became clear why living on seaweed is such a good idea for an amphipod. After three hours sitting in bare mud at low tide, only 4 percent of Gammarus individuals survived. But if there was seaweed around, 88 percent survived. Gracilaria gave them shelter in a habitat that was otherwise too hot and dry to tolerate. The seaweed also protected amphipods from predators. After three days in a tub containing predatory shrimp, every amphipod was gone. But if the tub also contained Gracilaria seaweed, more than half of the amphipods survived. (They presumably hid out in the seaweed's damp folds while their neighbors were plucked off one by one, though Gracilaria also produces bad-tasting chemicals when it's damaged

, which may have helped keep predators away). The seaweed protects amphipodsat high tide from predators that live in the water, and at low tide from drying out in the sun

. This means Gammarus is surviving where it never had a chance before. On the (figurative) heels of the amphipods, predators that eat amphipods—shrimp and crabs—have moved onto the mudflats too. And they've been followed by their own predators, Wright says—larger crabs, fish, and birds, which now come to hunt around the seaweed. "The invader creates conditions that appear to support a food web where it couldn't exist before," he says. When invasive species create new habitats with their bodies, like the Japanese seaweed does, "there are some native species that win and some that lose. Typically, many more lose than win," Wright says. This is what makes Gracilaria unusual: "Virtually every species out on the mudflat wins!" That wouldn't be a bad slogan for its development company. Photo by J. E. Byers